We have several ways to add a track or bus in Ardor3. The most basic one is from the 'Track> Add Track or Bus' menu [SHIFT + CTRL + N]. Another option is to right-click on the part of the editor where the controls for each track are located (that is, below where the Master bus is located in the editor window). 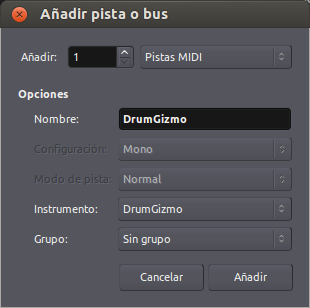 In this new window we can select the number and type of track (Audio, Midi or Bus), its name (if we insert several, it will add numbering to each name) and its grouping (which we will see later).

Besides, there are several selections that will depend on the type of track selected. In this case, as it is a MIDI track, it will allow us to choose the desired instrument (which are nothing more than the virtual instrument plugins that we have in our system). I will select DrumGizmo (available from the KXStudio repositories), a great drum kit project with 3 free kits already available downloadable from the project page.

How does DrumGizmo sound? Well fairly good… As you can see, it is already loaded into the MIDI track's "mixer in editor". That circle that you see under the "Inserts / Sends" section is an Ardor function to pan MIDI tracks, incompatible with the current DrumGizmo operation, so we right click on it and put it on bypass ("bypass" ). 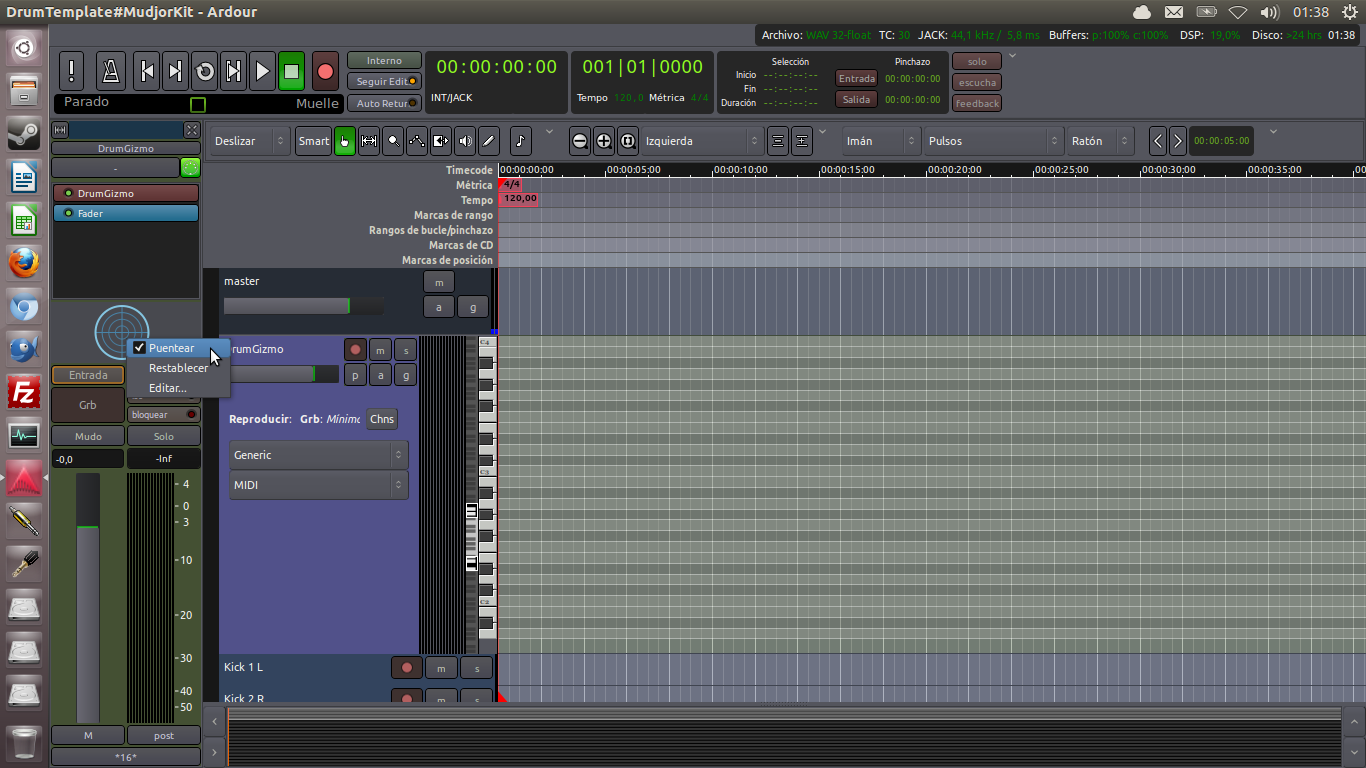 This is a LV2 plugin project that, despite its short life span, completes the Hydrogen Drum Machine's gap in DAW integrated use. Even though Hydrogen has some very good (and very light) drum kits, being able to operate the drum kit from the Ardour3 itself is very comfortable. I've had a look at DrumGizmo's "Roadmap" and it's still going to grow a lot in the near future (with interchangeable sounds, for example), so you shouldn't lose sight of it.

At the moment it has 3 drum kits, between 2,5 and 1,5GBs, so it will be important that you have enough RAM available. Of these 3 kits, Aasimonster (the one in the previous example) is the one that has convinced me the most (and weighs much less than the DRSKit).

DrumGizmo works very straightforward (at the moment). We select the drum kit indicating the Kit's .xml file, a progress bar will change from blue to green when it is fully loaded into RAM, and then we will select another .xml file that indicates the sequence of instruments with respect to the General Midi standard. 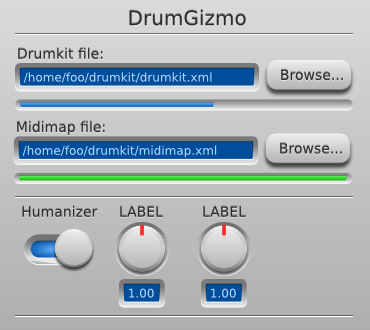 Note: on my first attempt I started to load the drumkit and then I selected the MIDI mapping (without waiting for the Drumkit to be green), I don't know if it failed because of this, but since I wait for it to be loaded and then select the Midimap I have not had a problem.

After loading the instrument plugin, we can start adding notes. If we are going to "write" them using the Ardor editor, it is advisable to maximize the track to be able to view them comfortably.

There are several options for increasing the height of a track. We can click and "pull" down from the controls region, or we can select it, right-click and modify it from the context menu. Finally, to the right of the toolbar zoom controls are two buttons for expanding and collapsing the tracks. 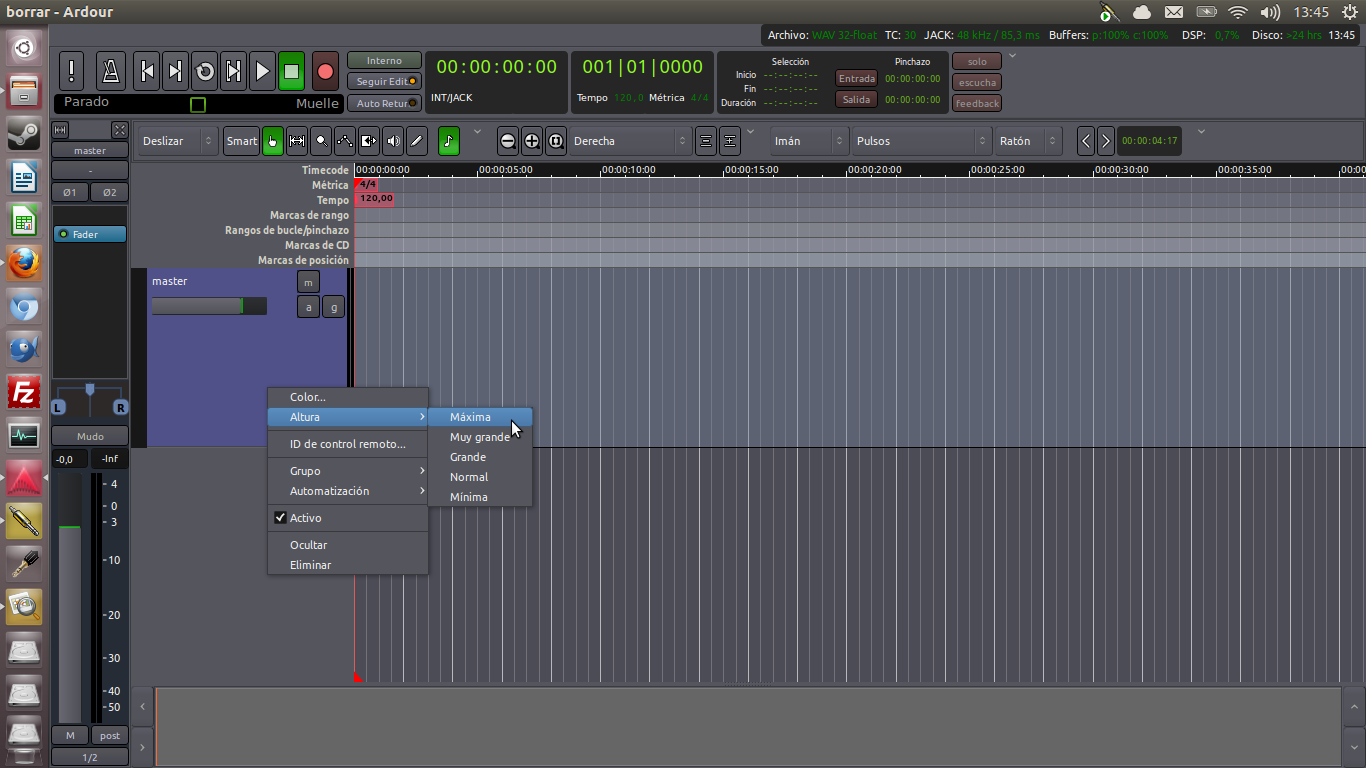 The MIDI tracks show, next to the controls, volume indicators for each channel and a piano with the list of notes. DrumGizmo includes sounds between the B1 / 35GeneralMidi and the C4 / 60GM (which is where most of the standard percussion sounds are.

We can modify the height of this piano in two ways:

If we now click on any of the piano notes that have a sound associated with it in DrumGizmo, we can listen to our drums.

I've felt compelled to tell you all about this, but the Ardor editor will have to be covered in another post, so for the sake of the tutorial, we'll import the MIDI file of an already created drum track (or loop).

This step is not essential in a project, as DrumGizmo's drums sound good enough by default to be used with the mere instrument track when composing. Besides, we can treat the same MIDI track with plugins, so a minimum of it could be equalized from this.

To take the mix "further", we will need to control the Kit parts independently, and for this we will need to "route" them to their own tracks or buses. To simplify the treatment, we will create some major buses to group toms, cymbals and ambient microphones. The difference between buses and tracks is that, in the latter, we can record the audio signal that passes through them (the bus is only to treat or route the corresponding audio).

If all we want is to treat the instruments independently, the proper thing to do would be to create buses exclusively. However, my idea is to dump the DrumGizmo sound to audio tracks so that later I can disable the plugin and thus free up RAM, so I will create 16 Mono Audio tracks to dump each DG channel. Later, I group these tracks into 5 buses: kick (mono), snare (mono), toms (stereo), overheads / cymbals (stereo), and room / ambience (stereo).

I have used the Muldjord Kit, which has 16 instruments. If the explanation available on the web was not enough, we can know what they are by opening the .xml file of the soundbank with a text editor. 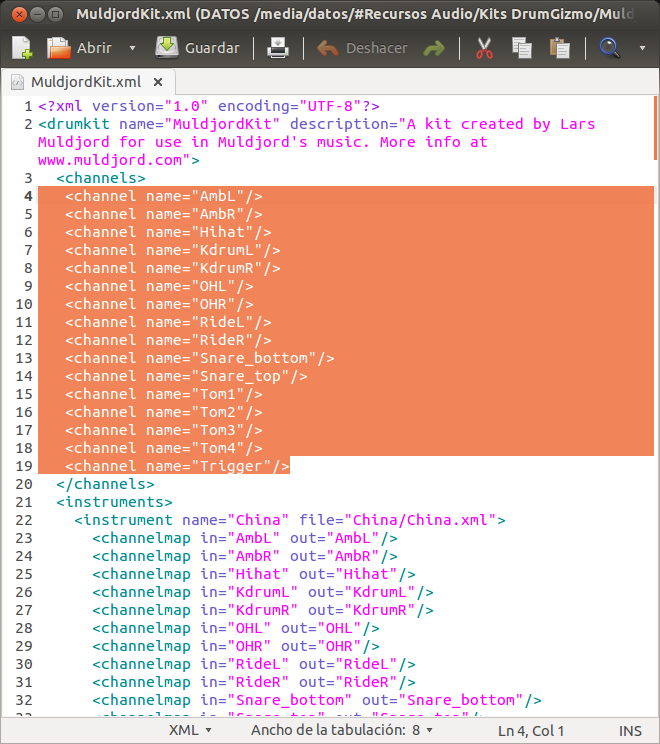 These channels are in order, so the Kit in question is:

Thus, I will create 16 MONO audio tracks (which I will then pan to taste if necessary) and group using the 5 buses mentioned above. 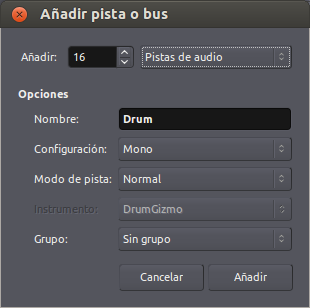 Once created, I rename them with the body of the battery that I want to connect to each one and group them. To group them, I select the first one and, holding down the SHIFT key, select the last one (Ardor will select the intermediate ones). In the context menu I will select 'group> new group'. 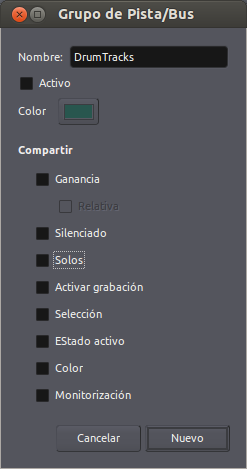 With this, the grouped tracks will show a tab to the left of their location in the editor. By clicking on it, the color selected in the previous window will be displayed.

The grouped tracks can share the characteristics seen above. If we activated "gain", by effect, it would be modified equally in all tracks when moving the fader of one of them. I don't need to share any of this, but grouping them allows me to hide the group so I don't see it when I want to work only with the buses.

The Ardor connection manager is available from the menu and from each track or bus. This last way is the most comfortable, since it segregates what refers to the entrance or exit of that track. If you look at the "mixer in editor", or at each of the mixer tracks [Alt + M], just below the name of the track or bus there is a box with the text "-", "input" or similar . Depending on whether you click right or left on it, you can access the connection manager or select them from a drop-down list. Below the fader and the "M / Post" controls for each track or bus is another box, which will do the same for the output of this one.

For our understanding, I want to connect the DrumGizmo output to the input of the audio tracks, so I will press the control located just below the M / Post of the MIDI track. After connecting each DrumGizmo channel with its corresponding Audio track, it looks like this: 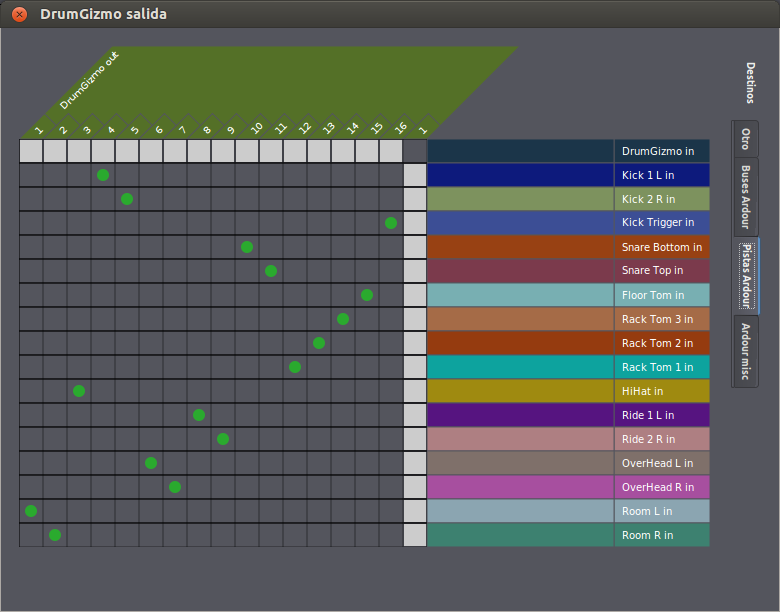 As you can see, the outputs of this track are arranged horizontally (having pressed the output connection button). All the possible inputs appear vertically, classified in tabs according to their inputs to buses, tracks, hardware, etc.

So far it is as simple as possible (and the entry is already being "hard"). We have one input connection per track because they are mono tracks, but when you want to route them to the buses, things will get complicated, since if I pan them the output will be stereo, so you will have to make twice the connections. To see it, better an example.

In any case, DrumGizmo has «bleeding», so the microphone of each instrument picks up the sound of other parts of the Kit to a greater or lesser extent, so if you pan (which doesn't have to be necessary), be consistent with the placement of the parts of the Kit (there are images and videos on the web) so that it does not sound unreal.

7. The tracks are not playing!

If they gave me a € every time I said something similar… By default, Ardor's tracks and buses are connected to the master bus, which in turn is connected to the speaker / headphone output of the audio interface. If we want to “separate” the DrumGizmo channels from the MIDI track, we must disconnect this from the Master. Why? Otherwise, when we equalize the kick drum track (for example), the master will be mixed with the output of the track where DrumGizmo is loaded (which we cannot silence, since otherwise DrumGizmo would not send anything to the connected tracks).

This is the basics, but there is another factor (only relative to the Audio tracks, not the buses). Again, we learn something new: each audio track has "input" and "disc" controls. The first will make what is entering the track play (even when playback is stopped) and the second will play what is recorded on the track when we play the recording.

Conclusion: if we have disconnected the midi track from the master and have routed it to audio tracks, we will have to activate the «input» control of each one of them. This concept does not exist in buses, since their mission is to transmit (not record or reproduce) the audio, treated or not.

With this we will have prepared a project with 16 drum tracks, to which we can add tracks from other instruments, default plugins, etc. We will see it with a simpler later case.

From the 'File' menu we can save the session with another name or "capture", but it will always be linked to the folder of this same project. The easiest thing, if we don't want to adulterate this folder, is to copy and paste it with another name, remembering to rename the .xml inside it as well.

After doing the process for the first time, it won't take us more than a few minutes to create our templates, which will save us having to set up a similar project from scratch.