In this new version we will be able to do the entire application and theme installation issue from a script, but in the same way, I will leave how to do it separately, since many loved using the themes and icons in their respective distros.

The guide is based on my guide to What to do after installing Linux Mint 18 "Sarah", in addition to the guide let's use linux and Ultimate Linux Mint 18 de Erik dubois (from which I took several scripts and customized them to my liking).

After completing the guide, your desktop will probably be this way, as well as updated, stable and with a good amount of essential software, all this quickly and safely.

In the same way, the most important characteristics are the following:

Some considerations to take into account before starting the guide

It is important to note that each of these steps have been tested and their correct result has been verified, in the same way, this is my personal step by step, so probably some things you do not need to do according to your tastes, this guide will save you a lot of time and above all it will help you to have your distro stable and beautiful.

It is possible that new updates have come out since you downloaded the image, so you can check if there are updates available from the update manager (Menu> Administration> Update Manager) or with the following command:

The Mint team classifies updates into five levels of security / danger, and the installation of level 4 and 5 from Ubuntu is not recommended for novice users, because it is suspected or known that they can cause instability or be fatal for the system. What we do by launching the command sudo apt-get upgrade by terminal is precisely install ALL the updates, both beneficial and harmful for Mint, which may cause some problems

In the Preferences Menu> Additional Drivers we can update and change (if we wish) the proprietary driver of the graphics card or other device that is causing problems.

Although by default Linux Mint installs the Spanish language pack (or any other that we have indicated during the installation) it does not do so completely. To reverse this situation we can go to Menu> Preferences> Language support or also by typing the following command in a terminal:

In case you have installed Linux Mint 18.1 on your laptop, I recommend that you install a battery manager that will allow you to manage the charging and discharging of your battery for them, we must follow the following steps:

The default configuration of this application guarantees proper use of your battery, so just install it and that's it.

Without a doubt, this is a mandatory step, to install git in Linux Mint 18, we must write the following command:

Erik dubois has made a big update to its script for automatic installation of applications, themes and icons, so we are going to use it in replacement of the one we had made in the version for Linux Mint 18. CWith it you can install the following applications and some others:

To do this installation you must execute the following commands:

A long process will begin that will optimize your distro, install all updates, clean the OS, install multiple necessary applications, install themes and icons. In short, by running this script, your Linux Mint 18.1 "Serena" will be ready to be enjoyed as it deserves.

There are many ways to customize your Linux Mint 18.1, many of them are free, I particularly don't have much time to install things one by one, go testing and so on, so I take advantage of 3 scripts that will allow us to install various themes, icons and settings for conky.

To access the script to download and install the best themes and icons, we must clone the repository that contains both, in addition to the scripts to install each theme separately. For this we must execute the following command:

Script to install the best themes for Linux Mint 18.1

To run the script all-in-once-installation_deb_themes.sh, found in the repository themes-icons-pack.git that we cloned, we must from the cloned directory, execute the following script in this way:

This script will automatically install the following themes for Linux Mint 18.1 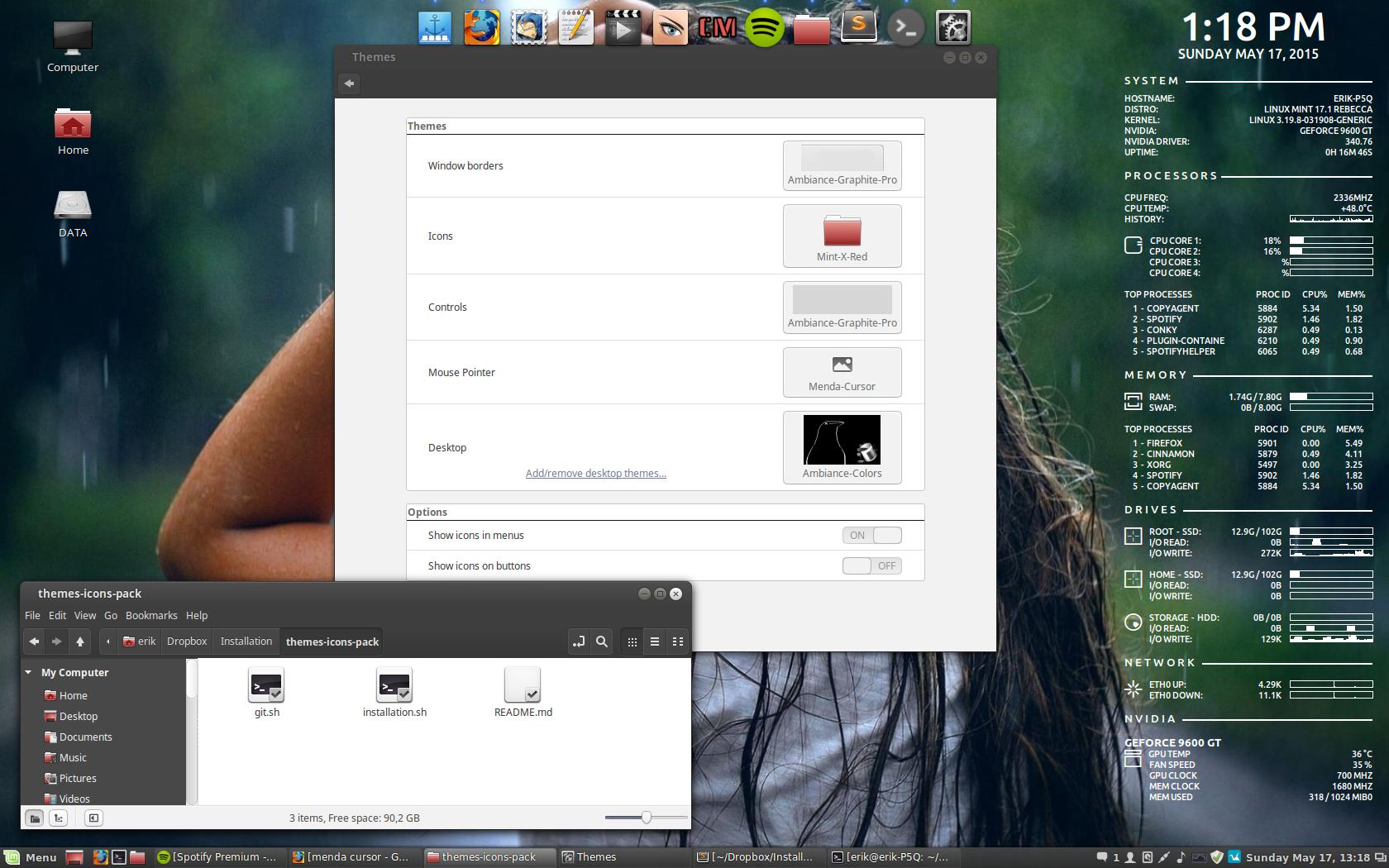 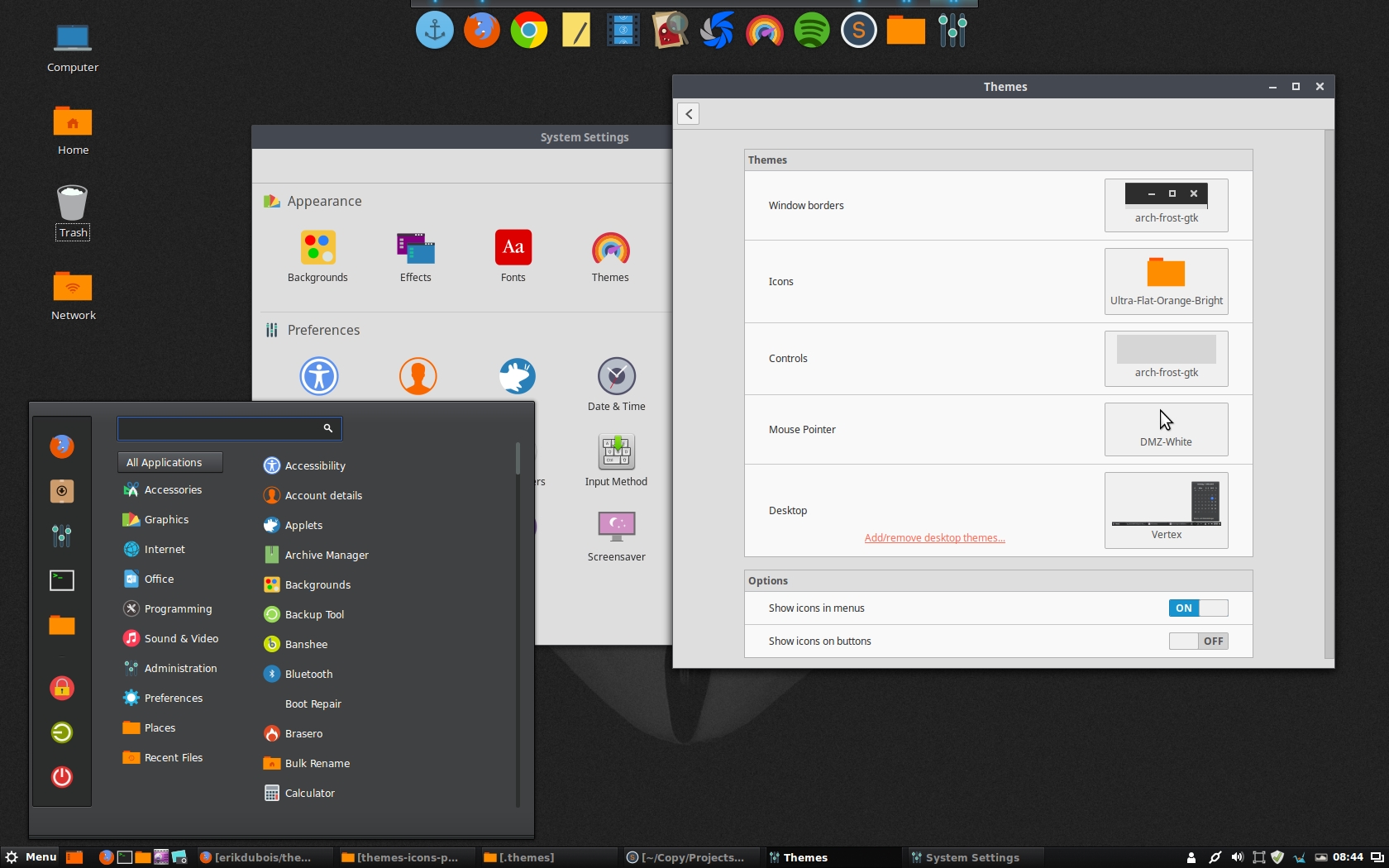 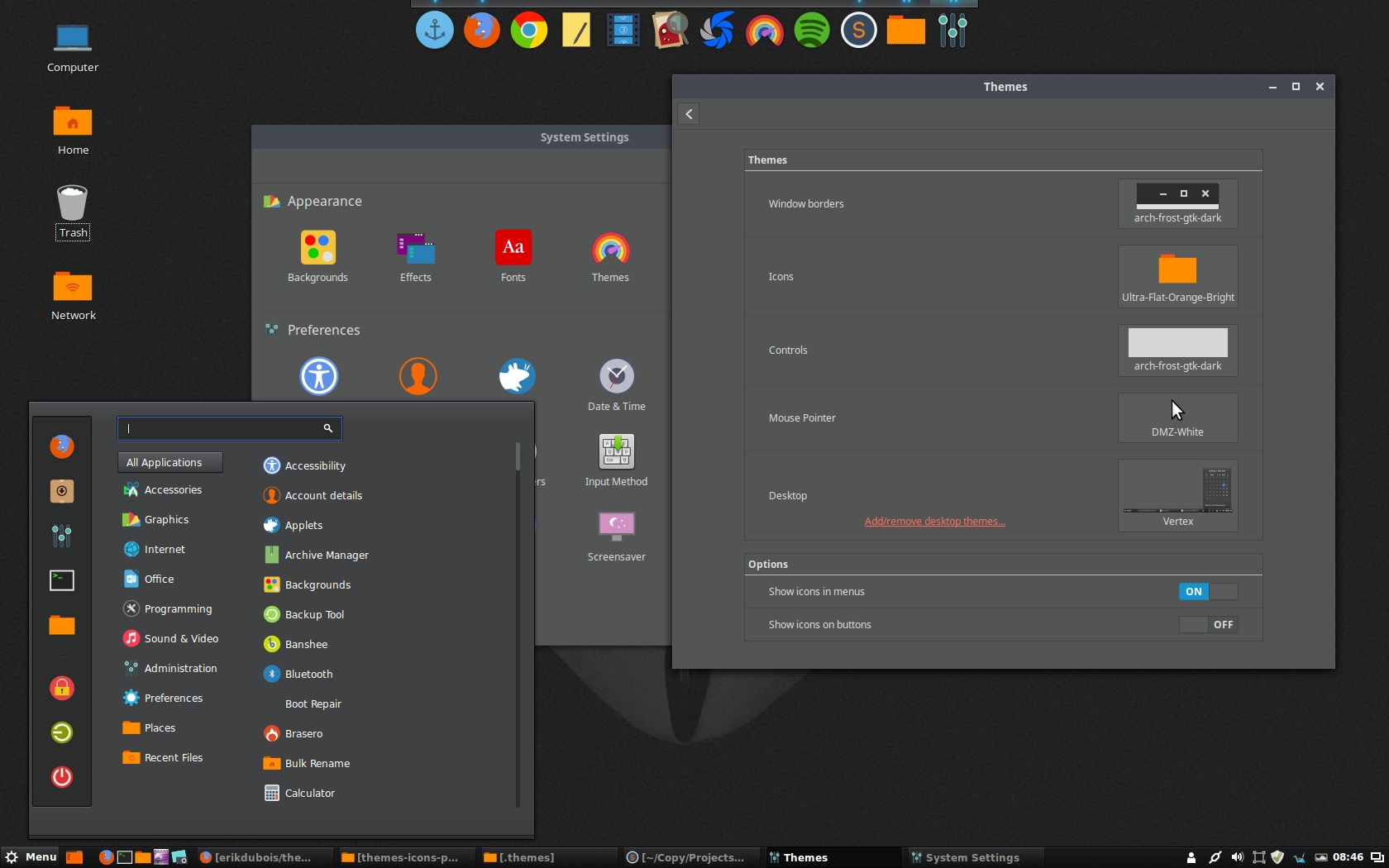 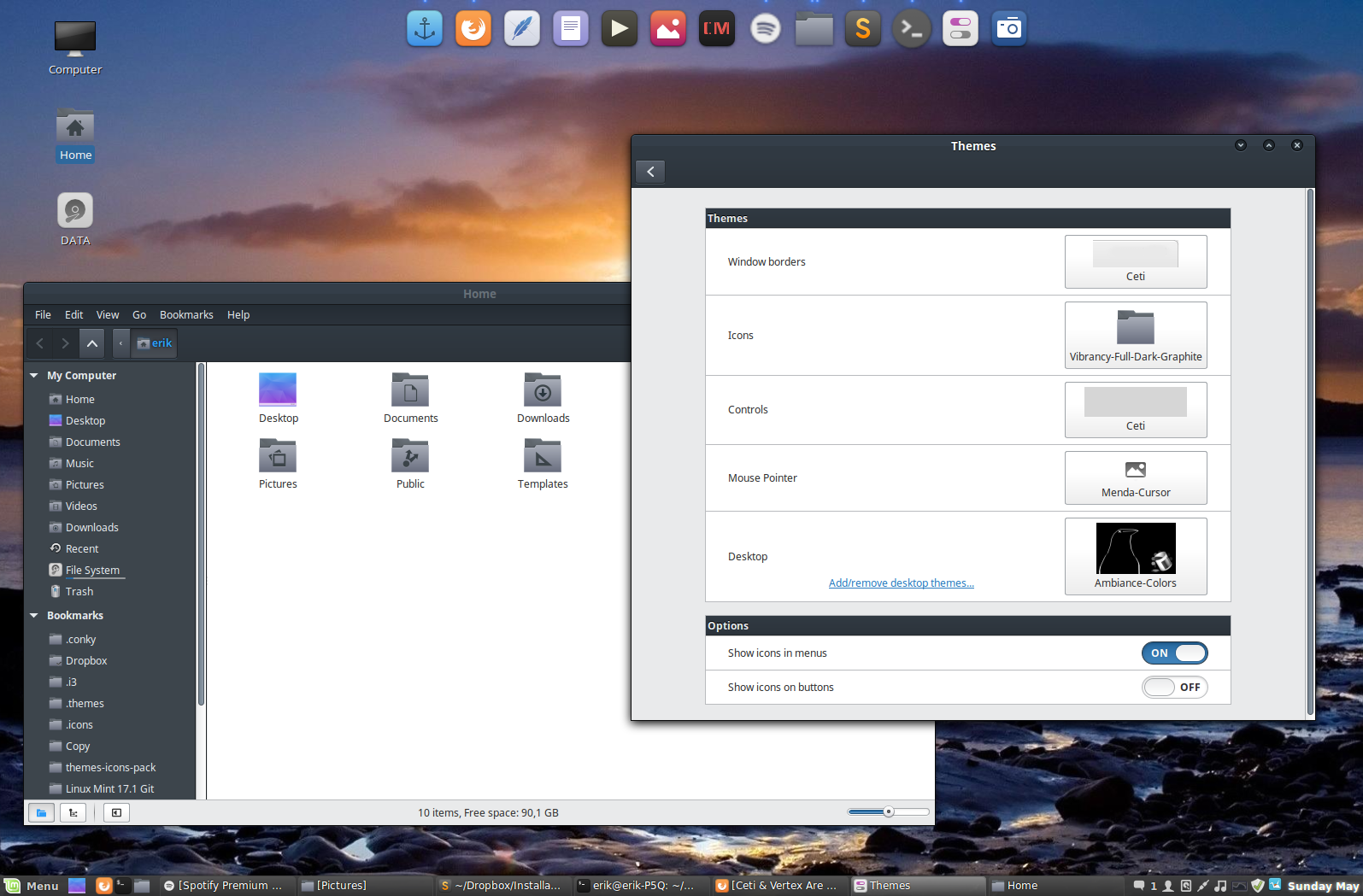 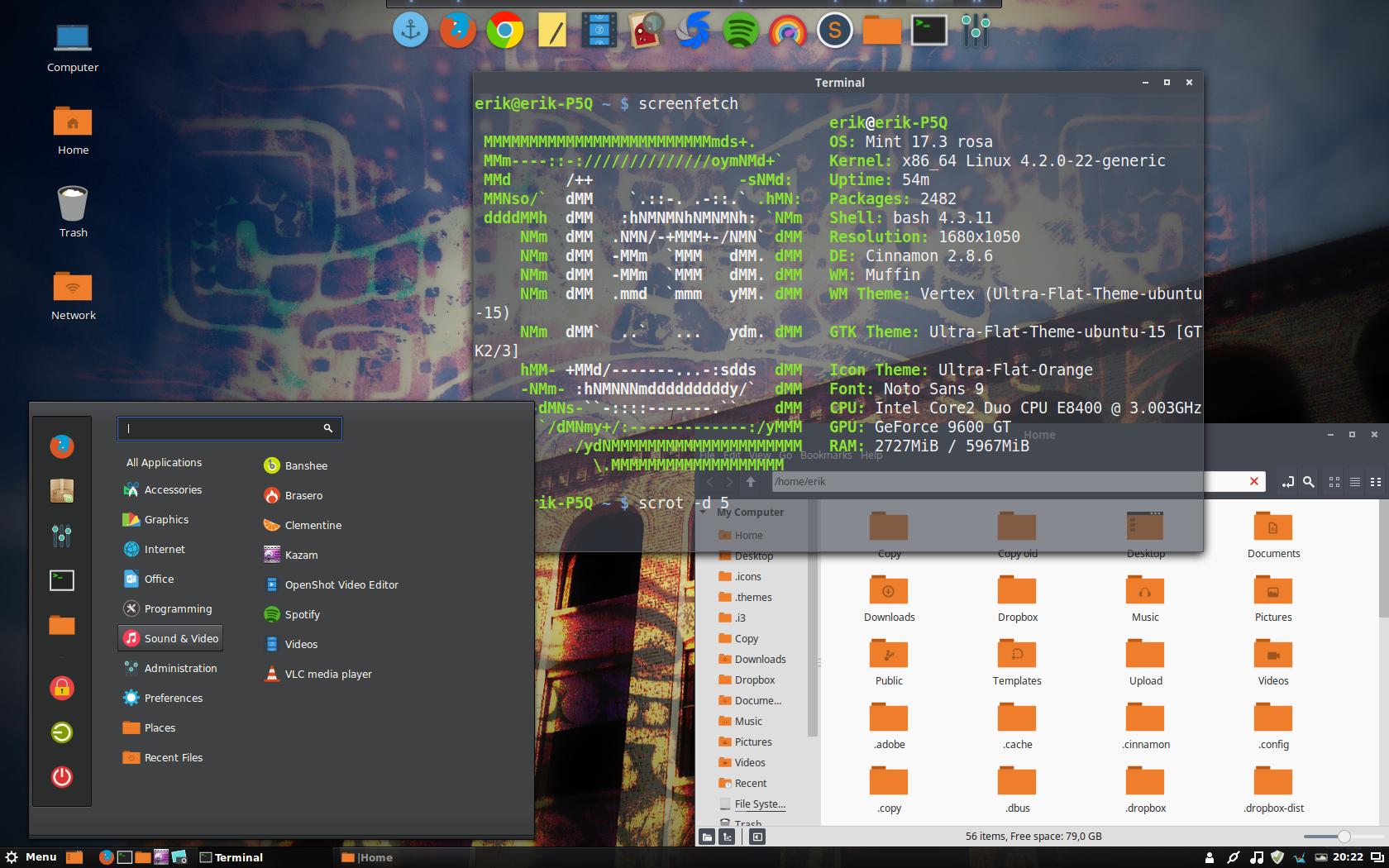 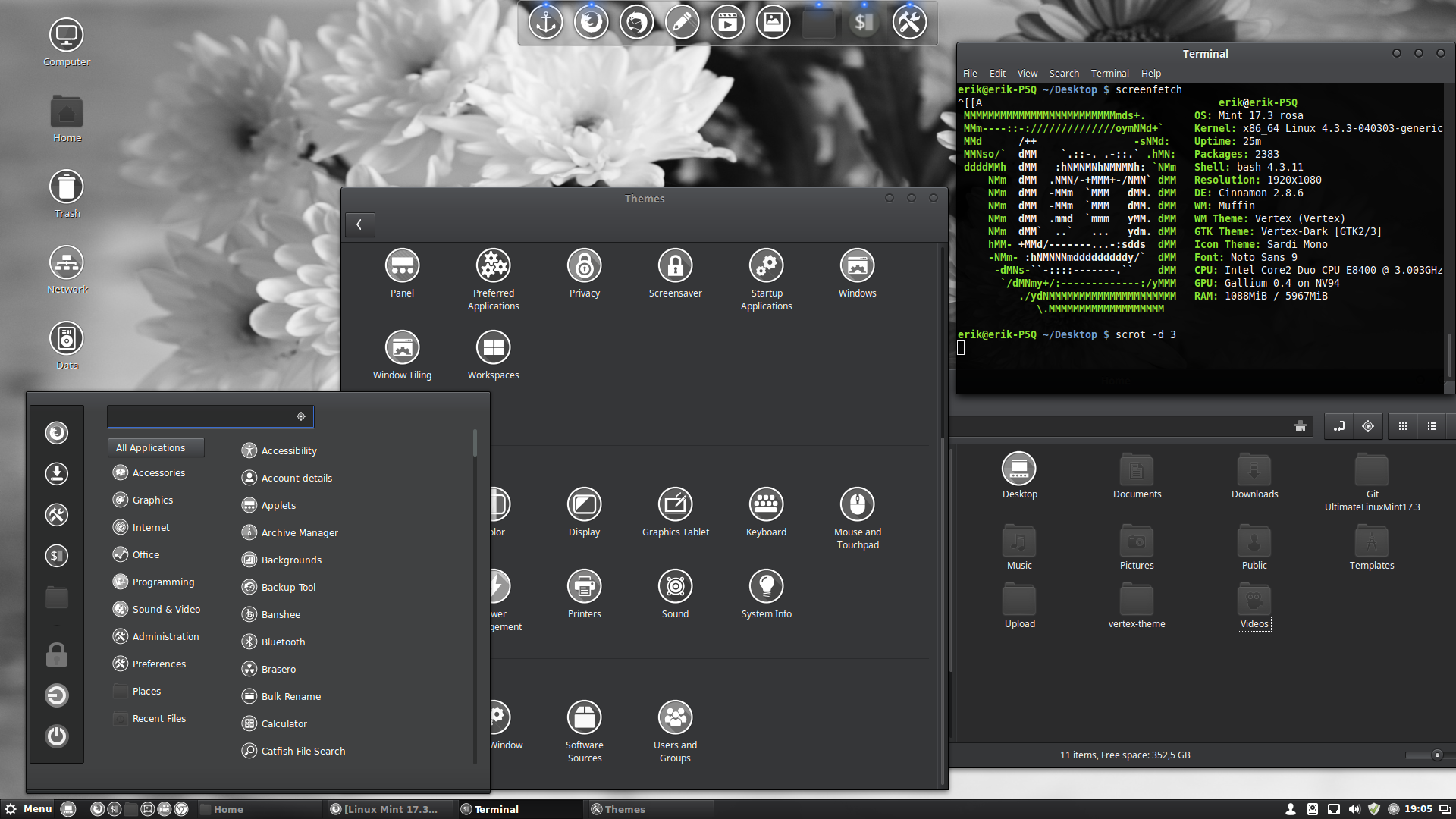 Script to install the best icons for Linux Mint 18.1

As we did with the themes, to install the icons we must locate ourselves in the directory of themes-icons-pack.git and run the following script like this:

This script will automatically install the following icons for Linux Mint 18.1 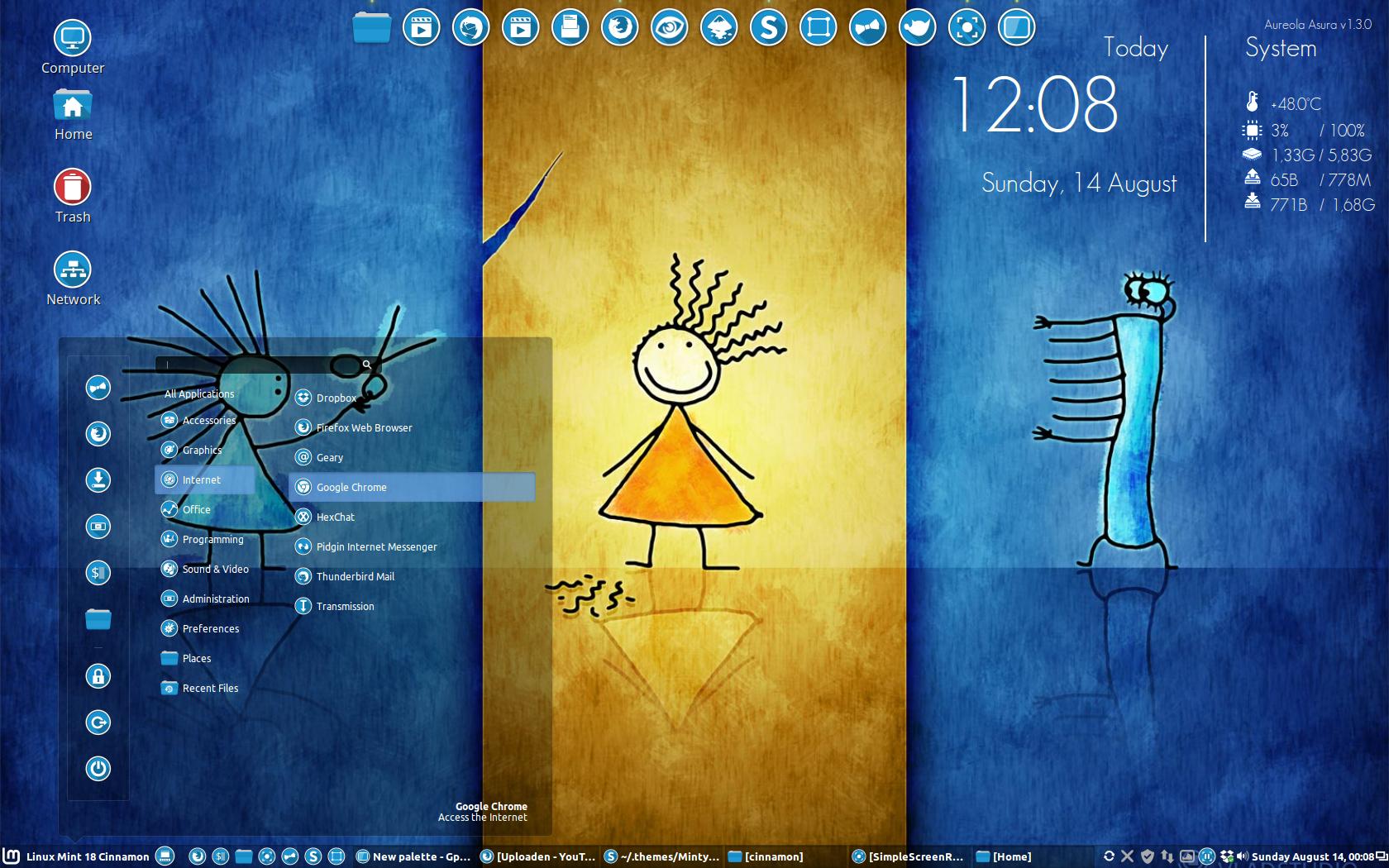 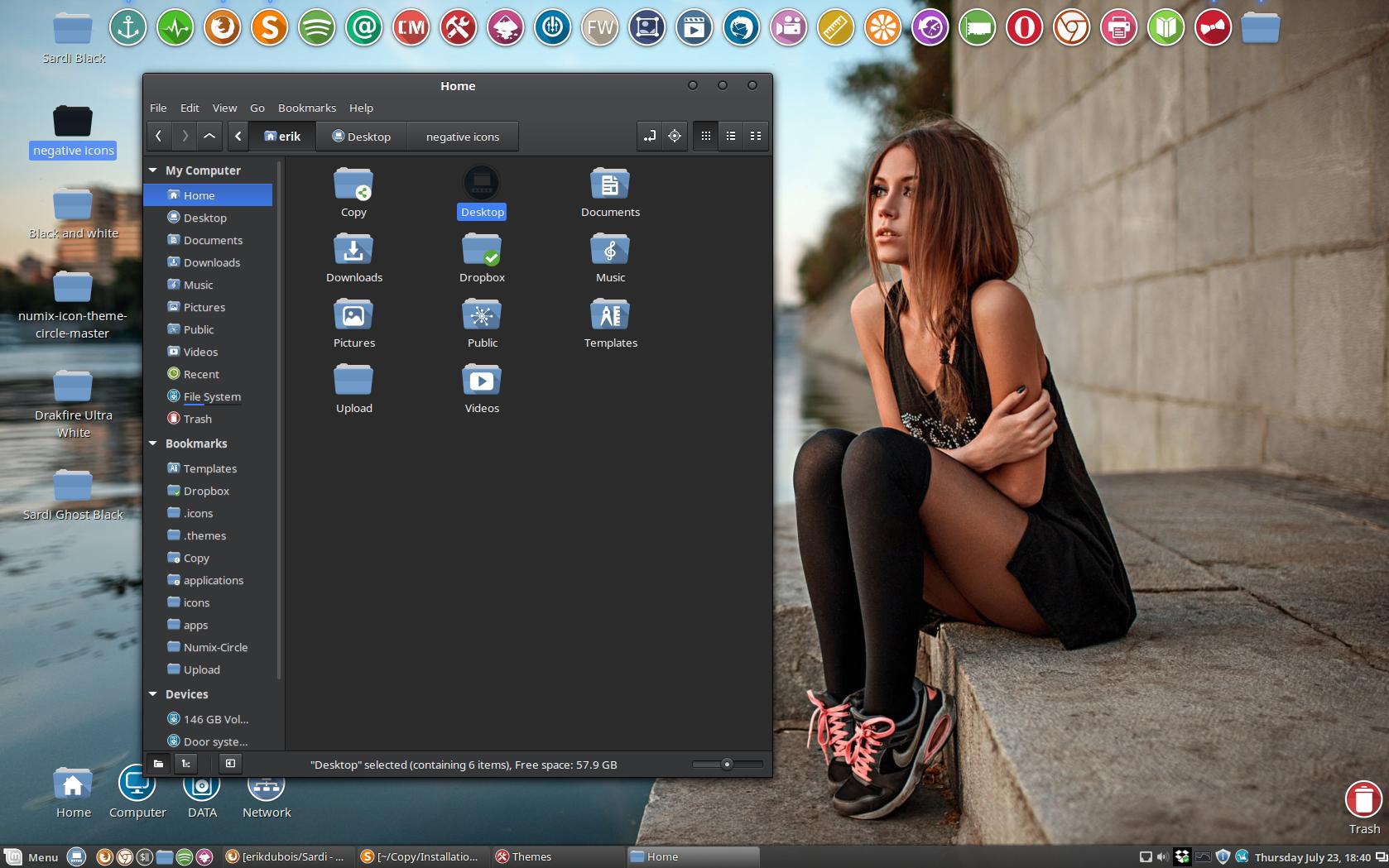 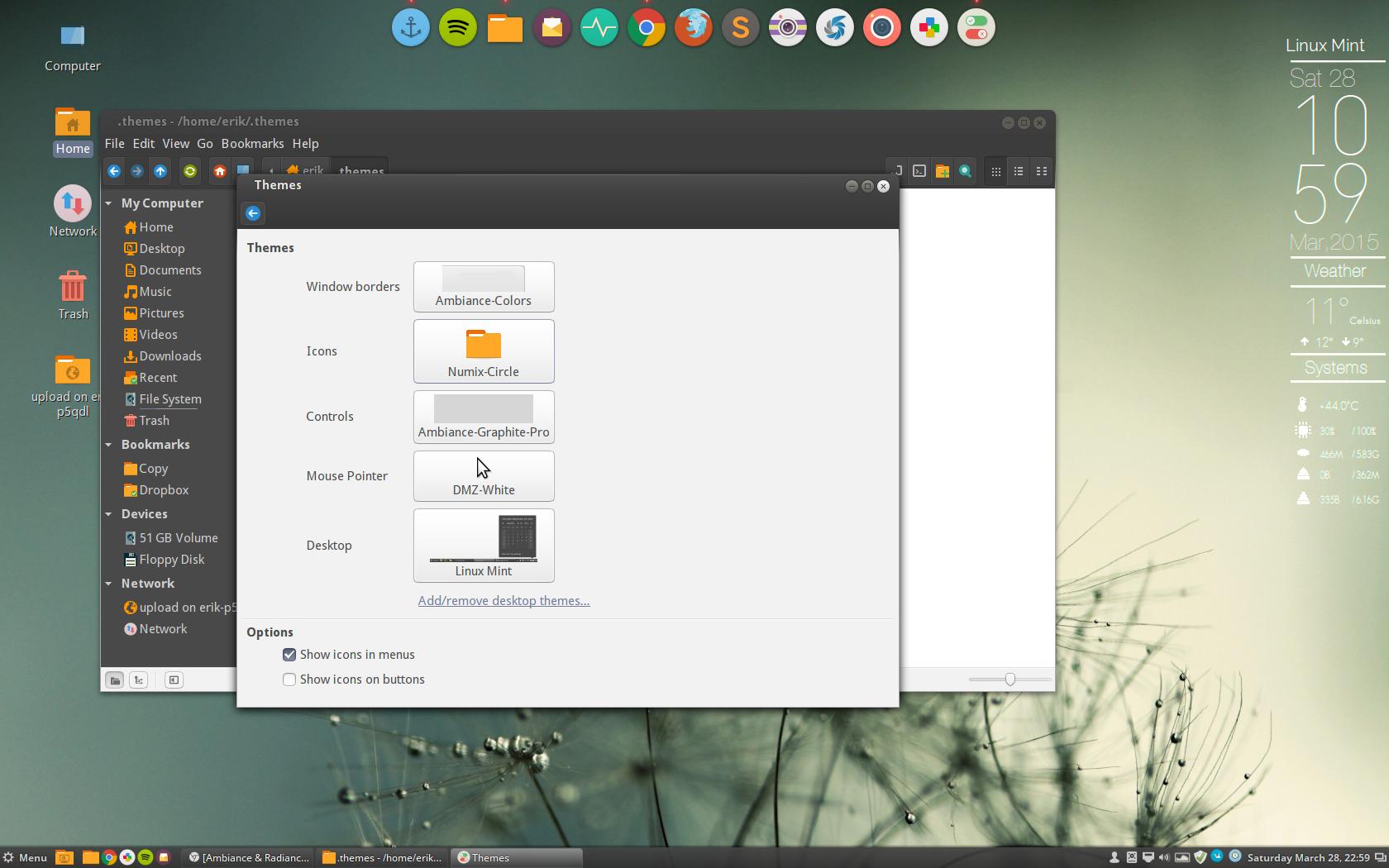 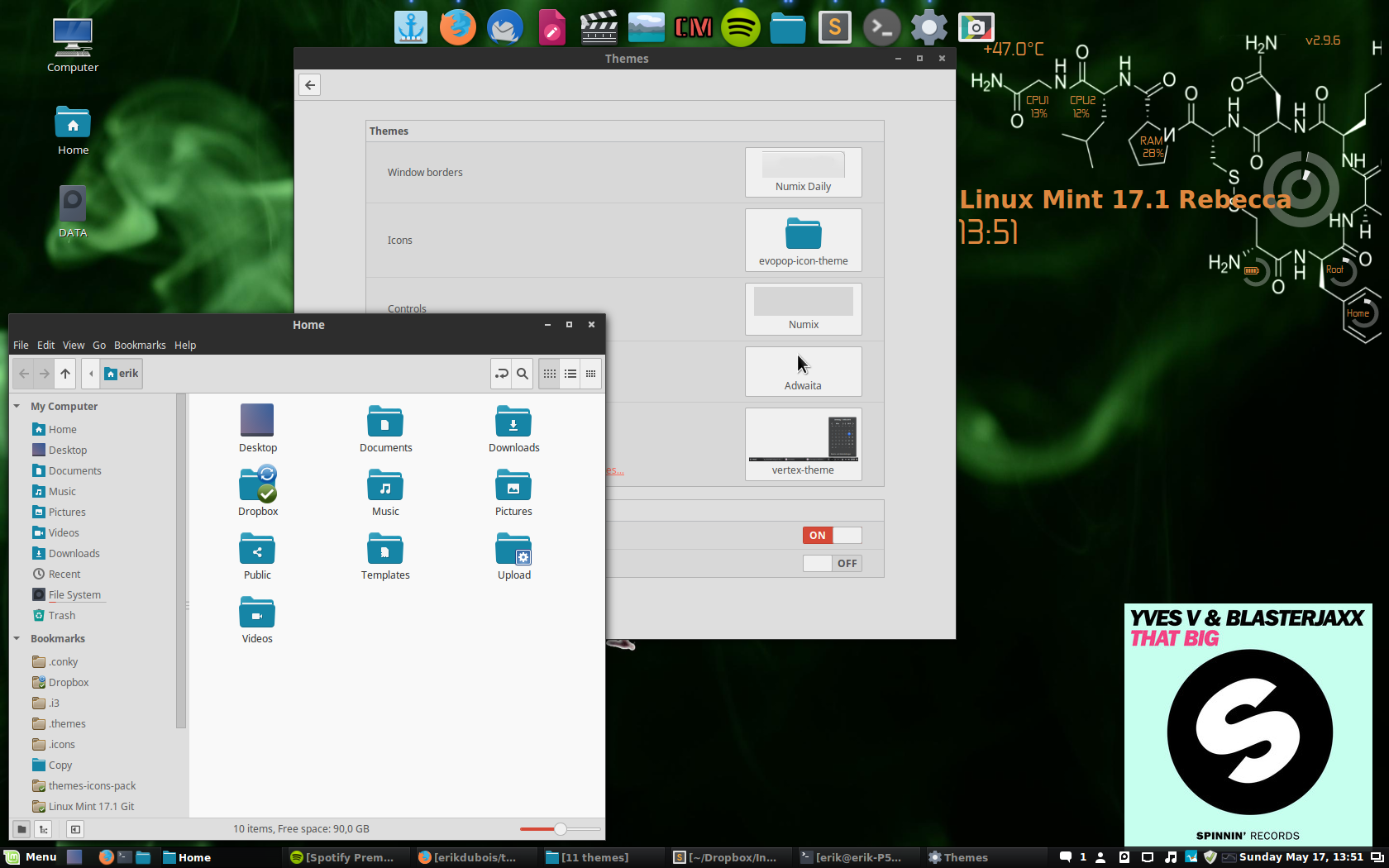 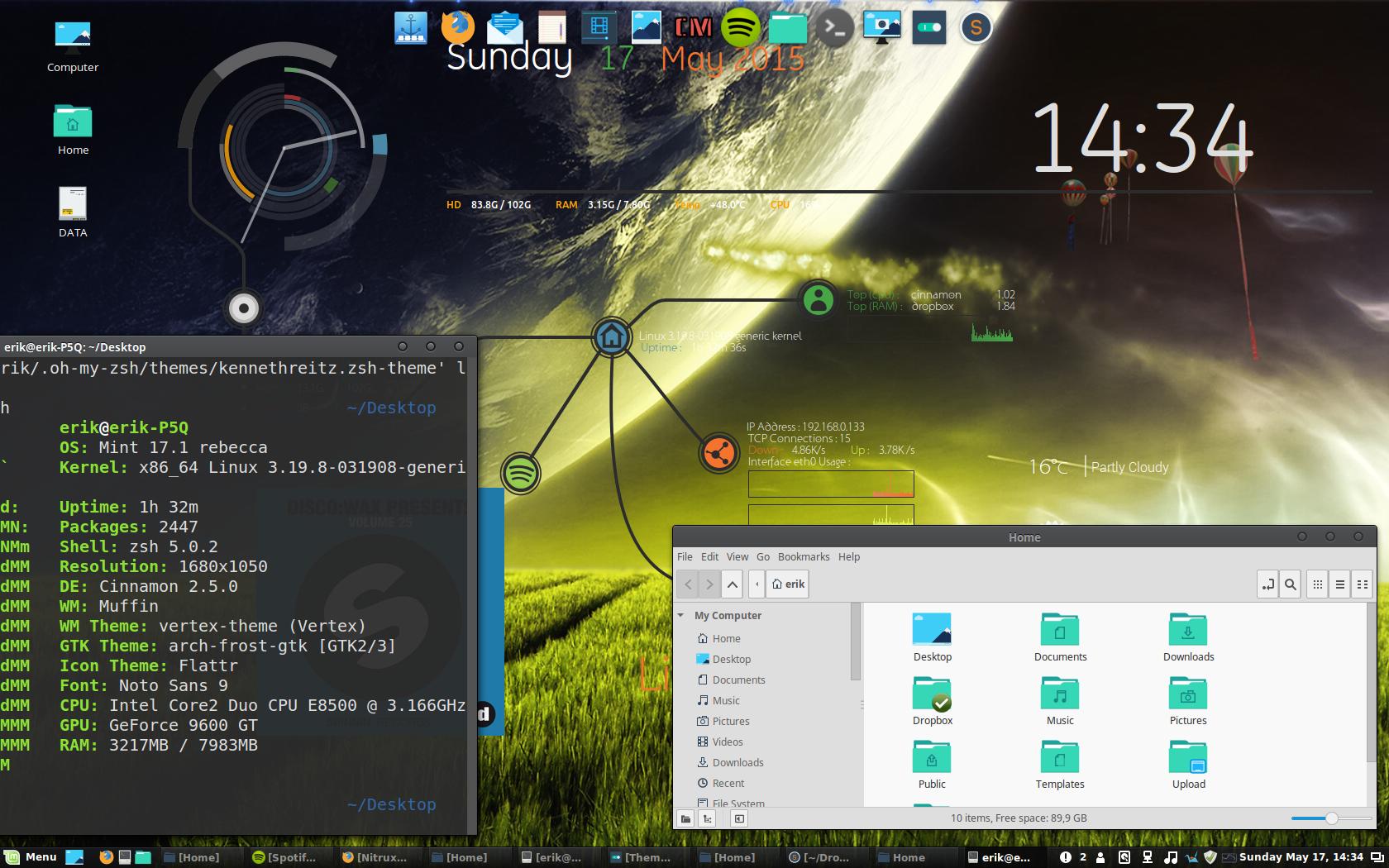 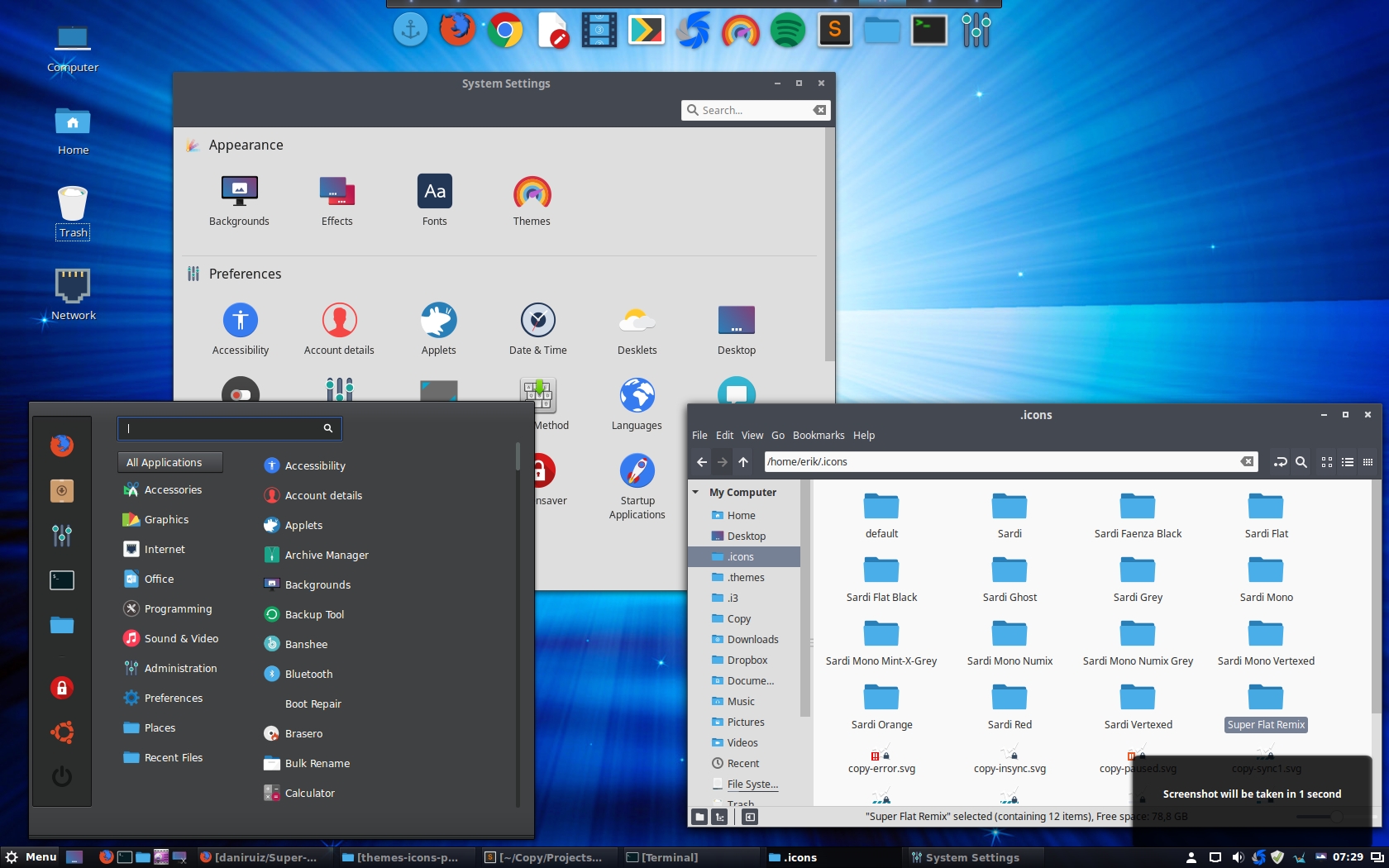 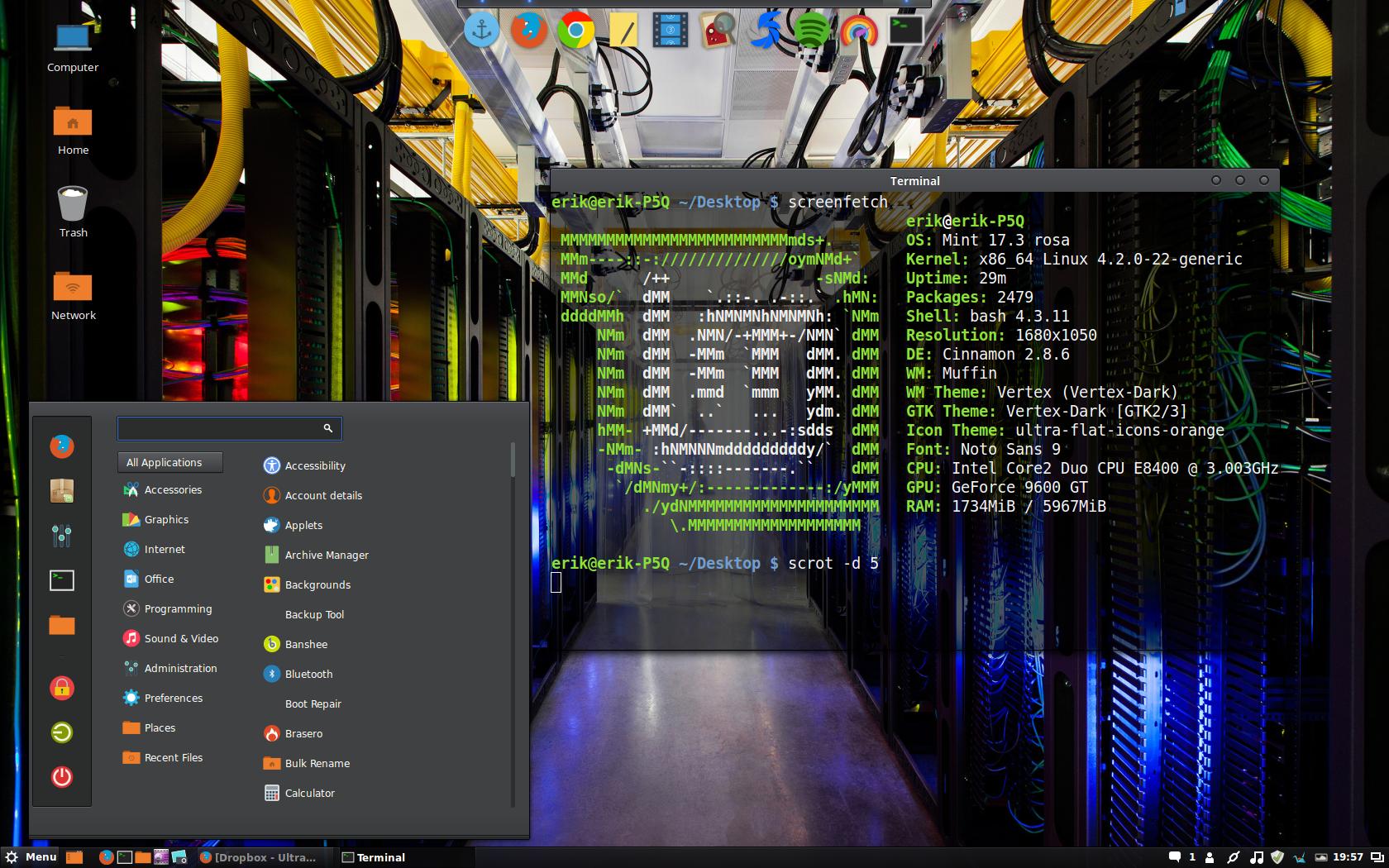 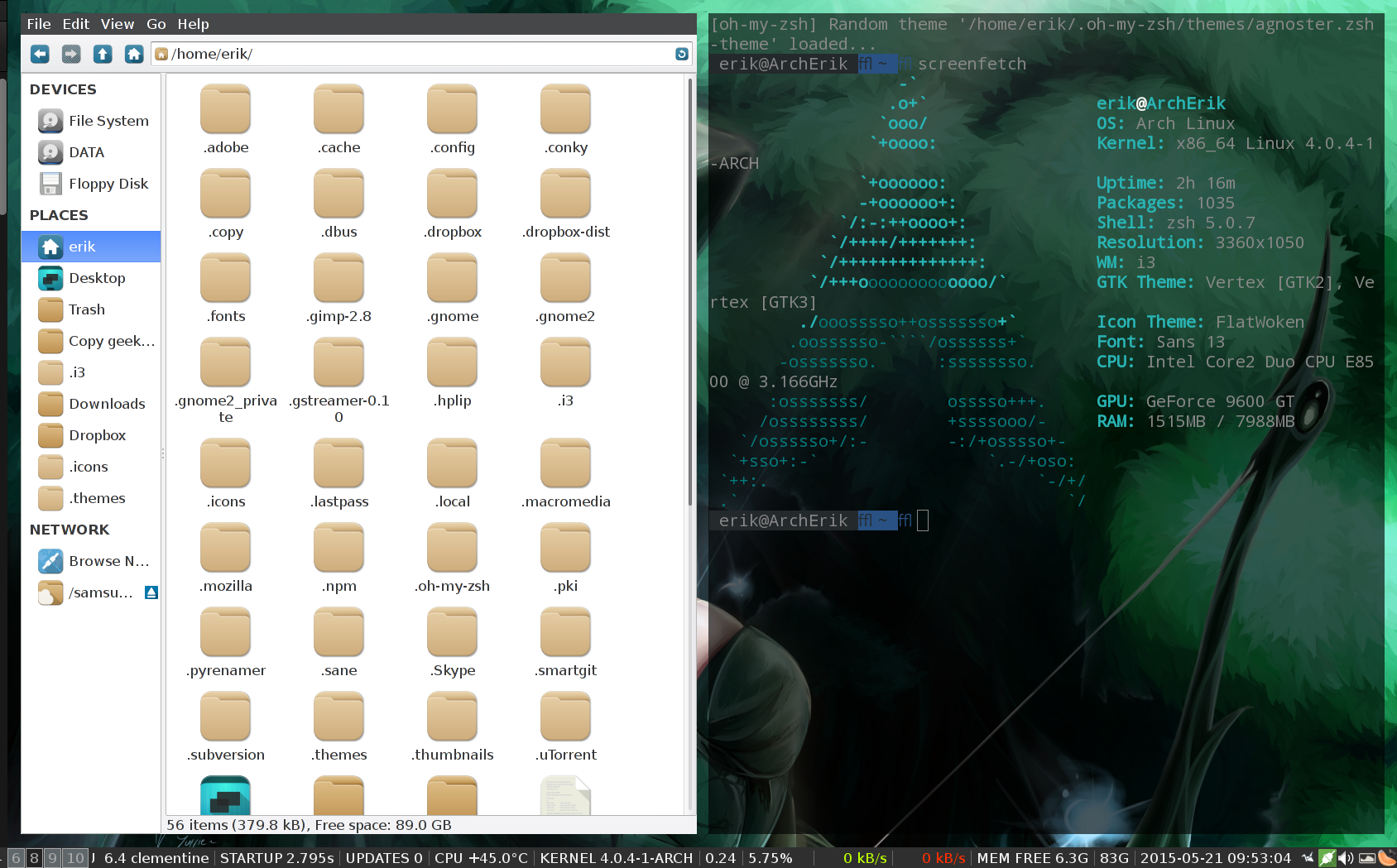 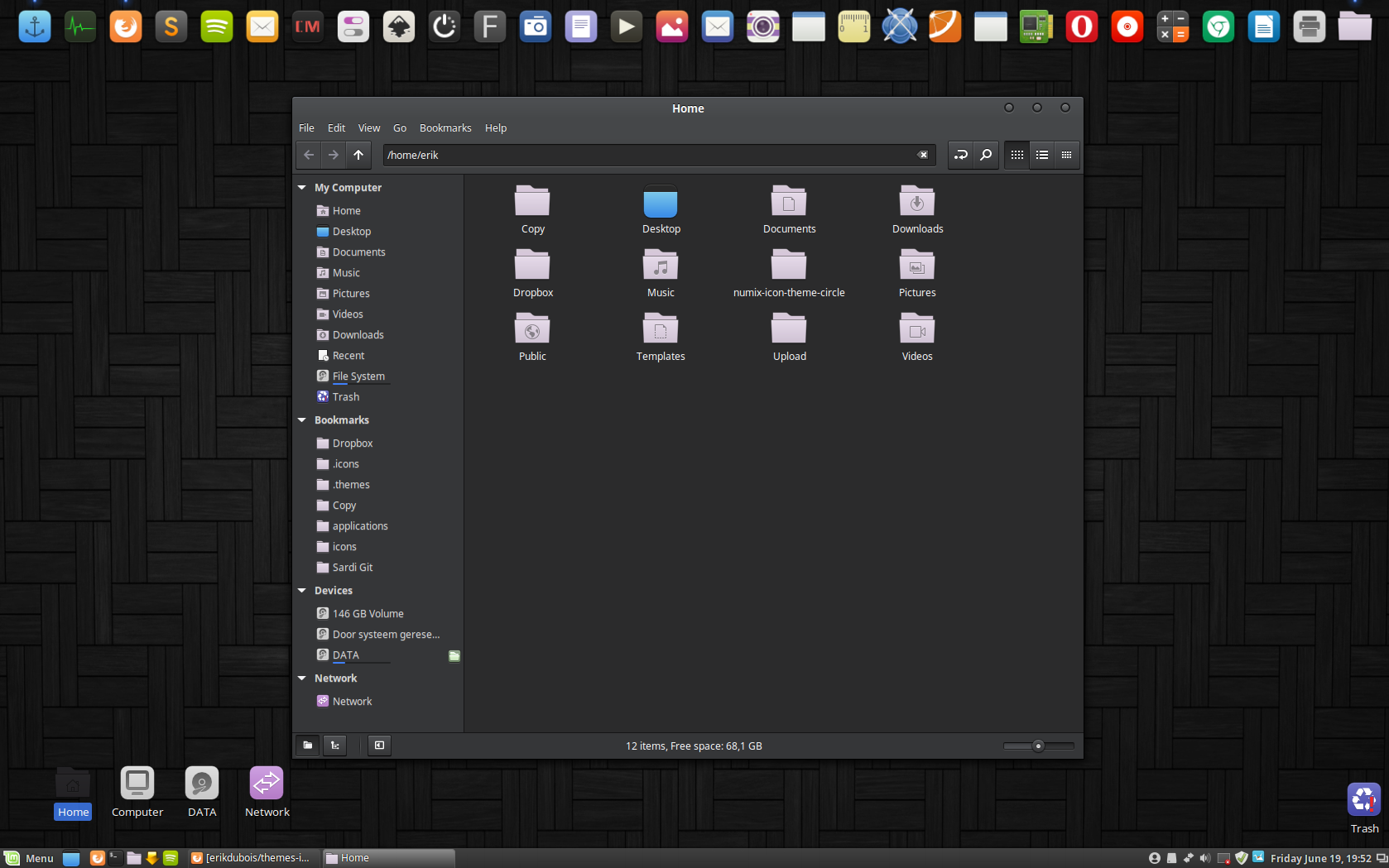 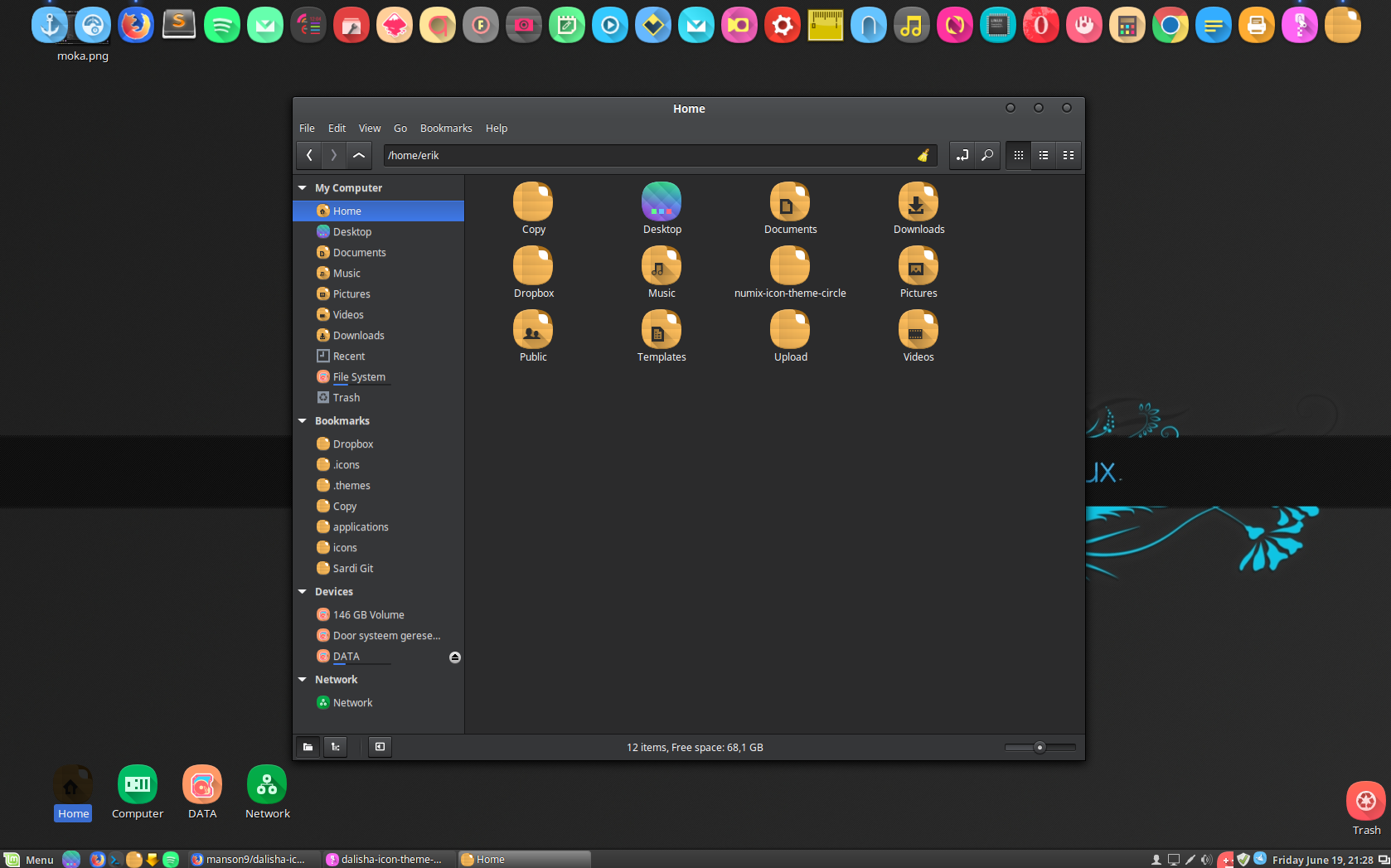 Selecting the Theme and Icons

Once you have installed the icon and theme pack, we proceed to select the most appropriate one, to do this from the menu we access «Topics», we choose the combination of Window Borders, Icons, Controls, Mouse Pointer and Desktop.

If you want your desktop to be like mine, you must choose the following configuration:

It is worth noting that if you want to uninstall the icons and themes in the future, you can do so by executing the following script found in the cloned repository:

Script to install the best conky configuration for Linux Mint 18.1

Conky, is a system monitor that displays information on various components, such as RAM memory, CPU usage, system time, etc. The great advantage is that there are many "skins" of this application.

In this case I use Aura a collection of excellent conky configurations, which we will access by cloning the official repository:

Open the folder and run the following script

This script will download a series of configurations from github and create the .aura folder (hidden folder). Where later each conky configuration can be selected, we go to the created folder

Once in this directory we execute:

which will update conky to the latest version. If we access the .aureola directory we will be able to view various folders which correspond to various conky configuration, to choose the one we want, we enter the corresponding folder and execute the following command: ./install-conky.sh which will make all the necessary settings automatically.

The conky configurations available in halo are as follows: 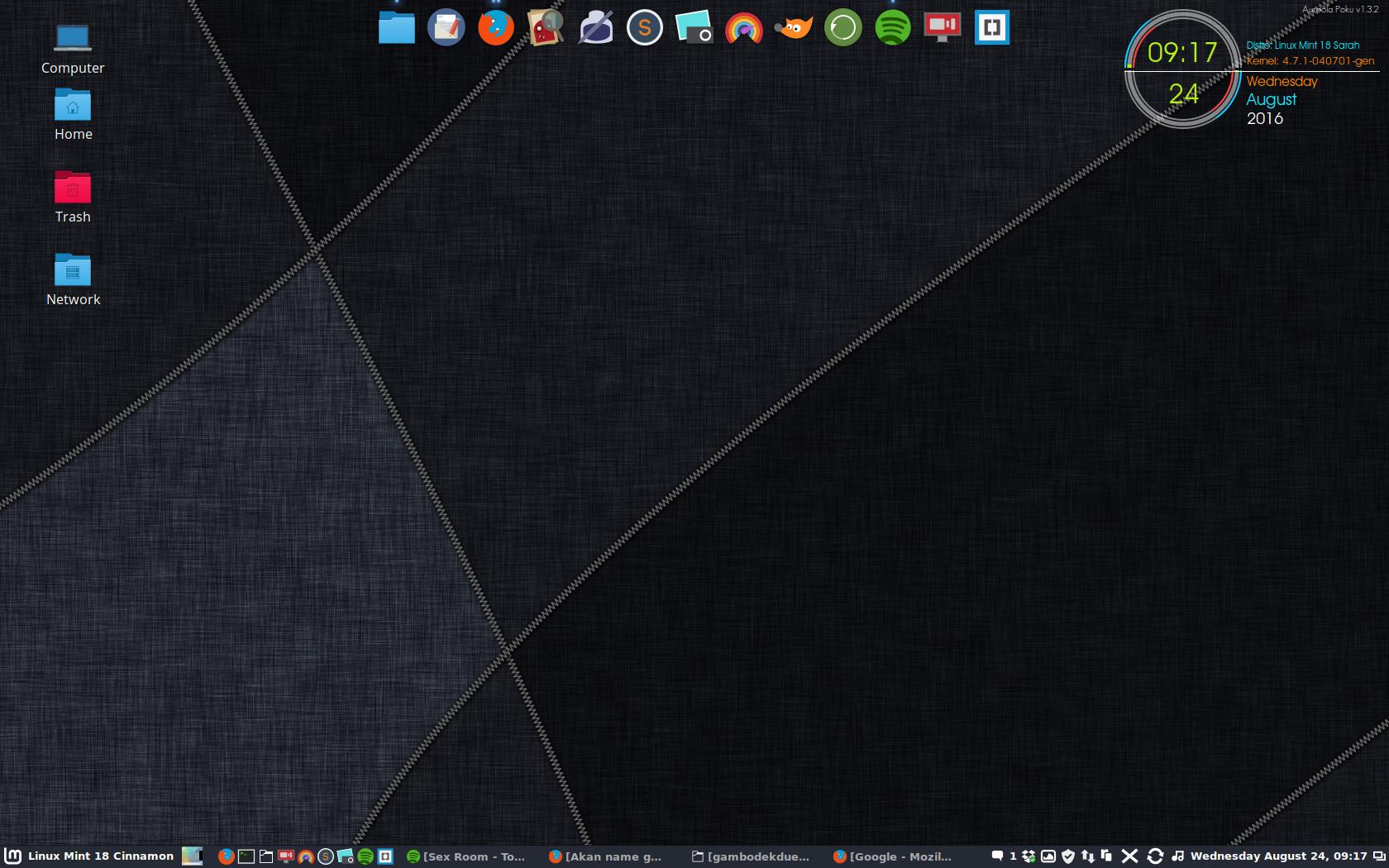 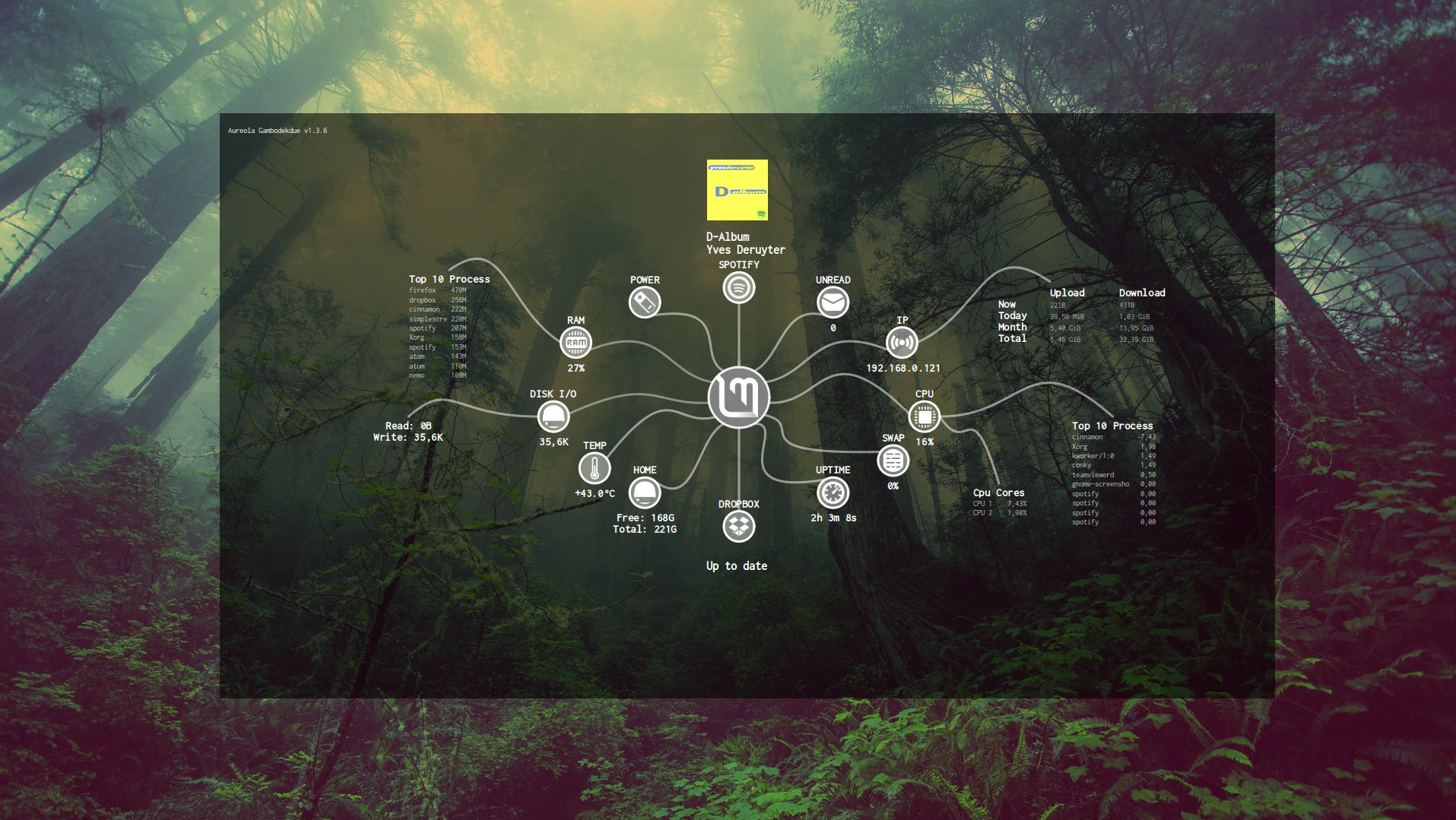 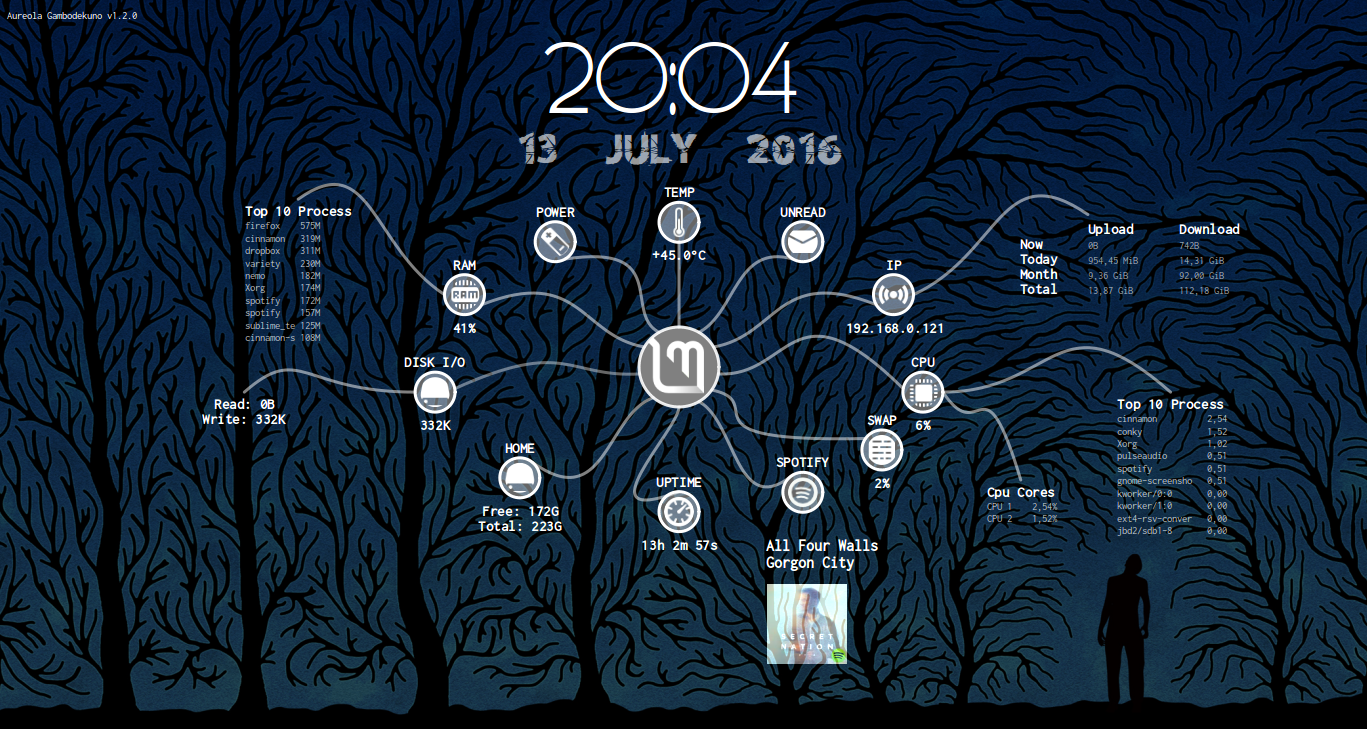 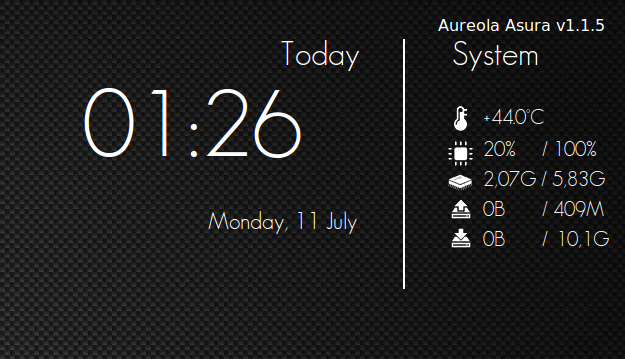 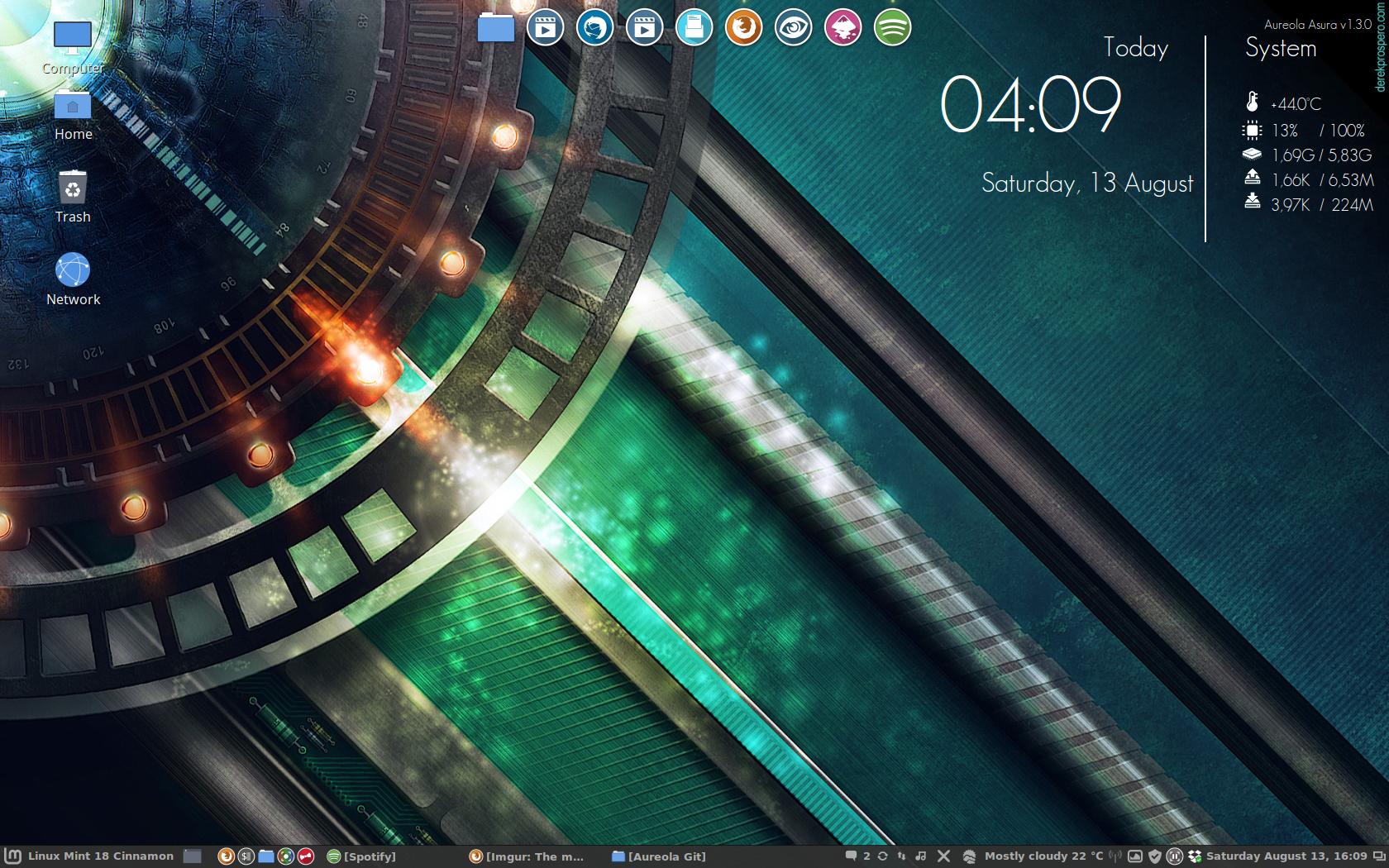 In order for Conky to run when Linux Mint 18.1 Serena starts, we must follow the following procedure:

From the Linux Mint menu go to aplicaciones al inicio, then add and create one with the name conky and the command conky

If it is necessary to install them, we must write the following commands in a terminal:

We accept the license terms by managing with TAB and ENTER.

It is important to do it from a terminal and not from any of the managers, since we will not be able to accept the terms of use in them.

For me this is not essential, but for those who like games, in addition to the large library of games that the repositories have, we also have http://www.playdeb.net/welcome/, another page that specializes in collecting games for Linux systems in .deb packages. If we also want to enjoy our Windows games, not to despair, since we have some alternatives:

1. Wine (http://www.winehq.org/) provides us with the compatibility layer to run not only games, but also all kinds of compiled software for Windows systems

2. PlayOnLinux (http://www.playonlinux.com/en/) another resource that provides us with a library capable of installing and using software designed for Windows

3. Lutris (http://lutris.net/) a gaming platform developed for GNU / Linux, a great resource despite being in development stages.

4. Winetricks (http://wiki.winehq.org/winetricks) works as a script that helps to download libraries needed to run games on Linux, such as .NET Frameworks, DirectX, etc.

For all these programs, we can consult in their respective official pages, the Linux Mint Programs manager or the terminal. Likewise, we highly recommend reading this mini-tutor which explains how to install and configure each of them.

For some time now, the Steam gaming platform can be used natively. This means that there are a growing number of games available on Steam that are natively developed to run on Linux.

To install Steam, just download the .deb file from the Steam page.

Then they will use the following command:

Possibly some dependency errors. If so, just enter the following command to repair them:

Then when you open Steam, it will update. Here You will find a complete list of Linux games available on Steam. 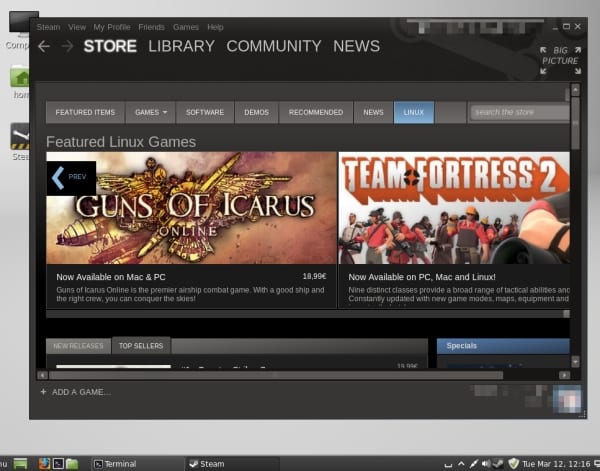 Install audio plugins and an equalizer

Some of them, like Gstreamer or Timidity, will help us to expand our catalog of supported formats; both are found in the Programs manager or can be installed using the command sudo apt-get install. It is also recommended to install pulseaudio-equalizer, capable of providing advanced Pulse Audio configuration and improving sound quality. To install it we will use 3 commands:

The rest is to get the software you want for each need. There are many ways to do it:

1. In the Program Manager, which we enter from Menu> Administration, we have a very generous number of programs for any function that occurs to us. The manager is arranged by categories, which facilitates the search for what we want. Once the program we need is located, it is only a matter of pressing the install button and typing the Administrator password; We can even create an installation queue that the same manager will execute sequentially.

2. With the Package Manager we do know exactly which packages we want to install. Not recommended to install programs from scratch if we do not know all the packages we will need.

3. Through a terminal (Menu> Accessories) and typing usually sudo apt-get install + program name. Sometimes we will have to previously add the repository with the commands sudo apt-get ppa: + repository name; to search for a program with the console we can type apt search.

4. On page http://www.getdeb.net/welcome/ (Playdeb's sister) we also have a good catalog of software compiled in .deb packages

5. From the official page of the project if you have any other installation steps.

To see a more extensive list, you can visit the Programs section of this blog.

La Official User Guide Linux Mint is not only translated into Spanish but is a highly recommended reference for the installation and daily use of the system.

We already have a complete operating system ready for our daily use. As always, it is recommended to explore the managers, options, configurations and other tools of the system to familiarize ourselves with all the virtues of our system.

It is also advisable to have your system constantly updated, start enjoying your favorite distribution, also share with the world what you have learned.

Finally, we await your comments on the guide: What to do after installing Linux Mint 18.1 "Serena"

Full path to article: From Linux » Tutorials / Manuals / Tips » What to do after installing Linux Mint 18.1 "Serena"