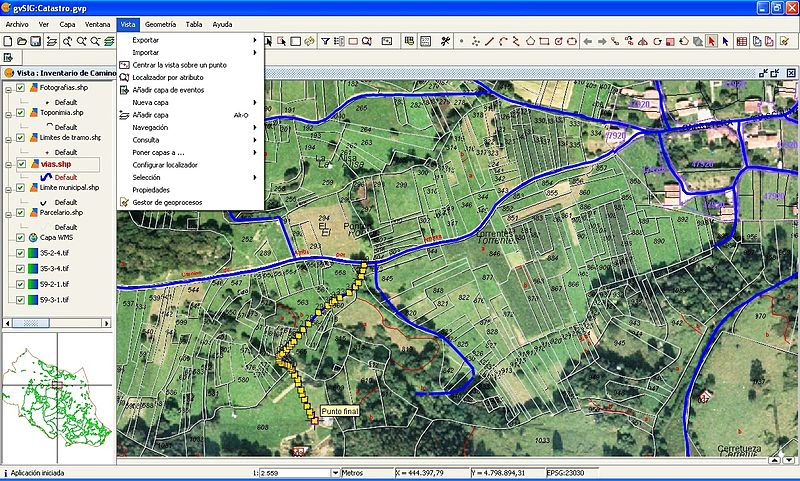 gvSIG is a free software development project for Geographic Information Systems, which mainly includes the gvSIG Desktop and gvSIG Mobile applications. gvSIG Desktop was the first application that was developed within the gvSIG project, which is why it is also known as gvSIG.

gvSIG Desktop is a computer program for managing geographic information with cartographic precision that is distributed under the GNU GPL v2 license. Provides access to vector and raster information as well as map servers that meet OGC specifications. This is one of the main characteristics of gvSIG compared to other Geographic Information Systems, the important implementation of OGC services: WMS (Web Map Service), WFS (Web Feature Service), WCS (Web Coverage Service), Catalog Service and Service of Gazetteer.

It is developed in the Java programming language, running with Microsoft Windows, Linux and Mac OS X operating systems, and uses recognized GIS standard libraries, such as Geotools or Java Topology Suite (JTS). Furthermore, gvSIG has a scripting language based on Jython and extensions can also be created in Java using the gvSIG classes.

Among the most common graphic file formats, it has, among others, access to vector formats GML, SHP, DXF, DWG, DGN, KML and raster image formats such as MrSID, GeoTIFF, ENVI or ECW.

Quantum GIS (or QGIS) is an open source Geographic Information System (GIS) for GNU / Linux, Unix, Mac OS and Microsoft Windows platforms. It was one of the OSGeo Foundation's first eight projects and in 2008 it officially graduated from the incubation phase. It allows handling raster and vector formats, as well as databases. Some of its characteristics are:

One of its greatest advantages is the possibility of using Quantum GIS as the GUI of the SIG GRASS, using all the analysis power of the latter in a friendlier working environment. QGIS is developed in C ++, using the Qt library for its Graphical User Interface. 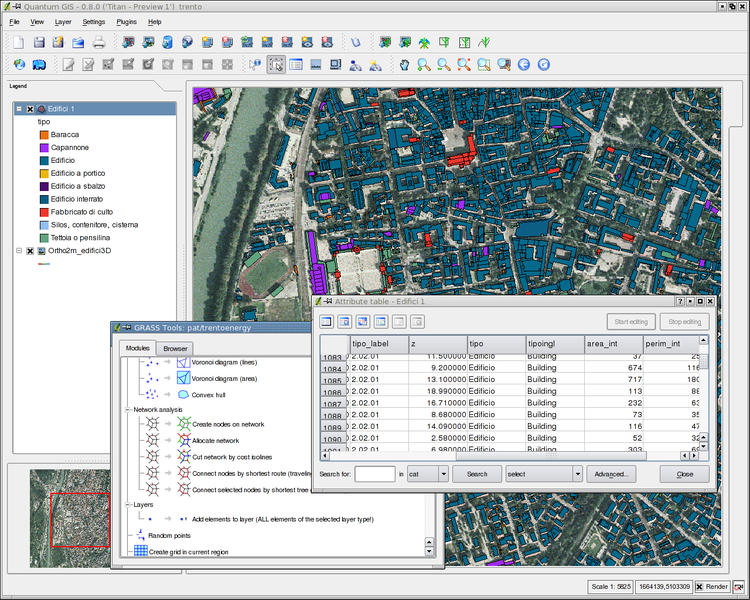 The first objective of SAGA is to provide an efficient and easy platform for the implementation of geoscientific methods through its programming interface (API). The second is to make these methods accessible in an easy way. This is achieved primarily through its graphical user interface (GUI). Together, API AND GUI are the true potential of SAGA - a rapidly growing and growing system of geoscientific methods. 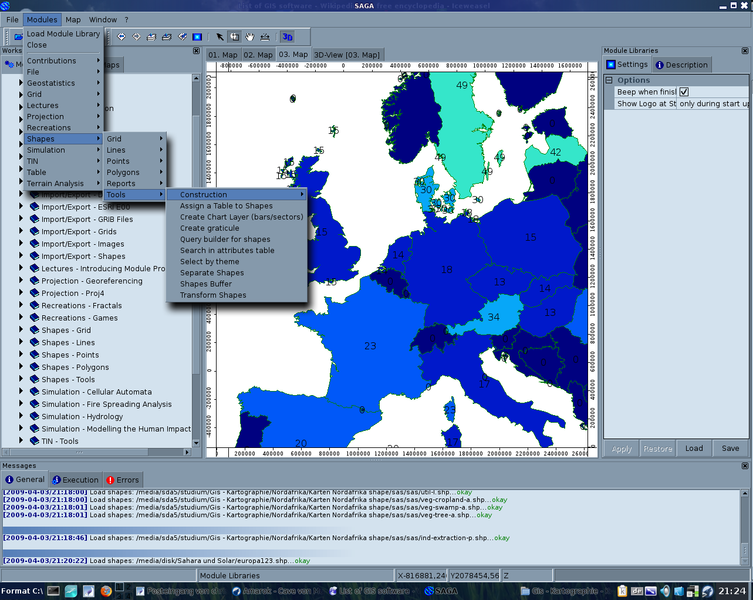 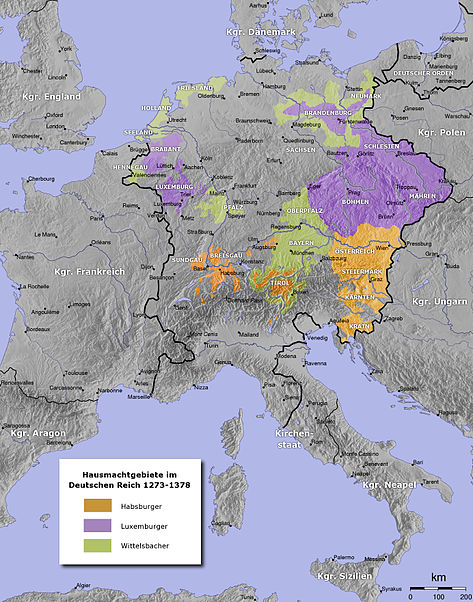 As explained on the official website of GMT http://gmt.soest.hawaii.edu/, GMT, which stands for Generic Mapping Tools, that is, Tools for Generating Maps, is a free package of software programs open, composed of around 60 command files 1, for the elaboration of geographic data and, in general, data in two and three dimensions, including algorithms for filtering, projection, mesh overlapping, etc. You can generate illustrations in Postscript files ranging from three-dimensional drawings to colored three-dimensional surfaces. GMT can generate approximately 30 types of geographic projections and contains information in its files on rivers, coasts and national borders.

We need only a handful of them. GMT can also read coasts, borders, rivers and lakes as vectors (that is, as mathematical curves) and is directly or indirectly compatible, through conversions, with well-known geographic databases.

GMT does not originally have a graphical user interface. For the generation of maps, you must resort to the command interpreter (command line) of the operating system in which the program is being used. This is where the commands with their corresponding parameters are entered so that an image is generated in PostScript, a file with the extension ps. The Postscript file thus created can be converted to other formats and later edited with an image editing program. The generated maps must be licensed under the GNU Free Documentation License.

GRASS (English acronym for Geographic Resources Analysis Support System) is a GIS (Geographic Information System) software under the GPL (free software) license. It can support both raster and vector information and has digital image processing tools.

In its beginnings, in 1982, the software was developed by the United States Army Construction Engineering Research Laboratory Corps of Engineers (USA-CERL) as a tool for the supervision and environmental management of the territories under administration of the Department of Defense not finding any GIS on the market that meets these needs. In 1991 it was made available to the public through the Internet. Its popularity increases in universities, companies and government agencies. In 1997, when USA-CERL GRASS announced that it would stop supporting the program, Baylor University took over its development. As of this date, its acceptance within the academic world increases. On October 26, 1999 with version 5.0 the code of the program is released under the GNU GPL license. GRASS was one of the first eight projects of the OSGeo Foundation. In 2008 he officially graduated from the incubation phase.

On Linux, the graphical interface for GRASS is Quantum GIS, also known as QGIS.

More information about GIS at: OSGeo. You may also be interested OpenStreetMap.