In the article Step by step to set up an ERP and CRM for your SME We taught how to run a virtual machine that had a preconfigured Odoo 8 installation, which allowed us to enjoy this ERP in a simple and fast way, this time we want to enter the world of Docker and install Odoo using this great technology.

Basically with this tutorial you will learn how to install Odoo with docker and add external modules that will allow you to improve and expand Odoo's functionalities. Thanks to docker, you can have any version of Odoo on the same computer and have multiple instances running, which will facilitate development and start-up at any time, in any organization and especially in any environment.

The procedure is quite simple but I will try to make it as detailed as possible, the steps and procedures will focus on distros with Ubuntu 16.04 but can be easily applied on any Linux distro.

To install Docker in Ubuntu, just run the following command:

Add your user to the Docker group

We must execute the following command:

The easiest way to install Docker-ompose is using pip, to do this run the following command:

Install docker-engine with the following command:

In order for all changes to be taken properly, it is convenient to restart docker using:

Once we have installed docker, we must create the file docker-compose.yml In the directory of our preference, it will contain basically all the information necessary to deploy our service with Odoo.

This file will contain the following:

In this file we can make the following changes to adapt it to our requirements:

In general lines with this docker-compose.yml We invoke a set of containers that are related to each other, such as the odoo version container and the postgres container, likewise for the first container we state that it will listen to port 8069 (and it will be able to access the one we indicate) and in addition, a local volume called extra-addons is mounted that will automatically link with the / mnt / extra-addons in the odoo container.

Finally, the username and password to be used for postgres is described and it is determined that when the guest computer restarts the docker service it will also do so, thanks to the restart: always parameter.

Once we have created our docker-compose.yml, we must start the Odoo instance, to do this from the terminal we go to the directory where the file created previously is and execute:

The download of the necessary docker containers will start automatically, the database will start and we will be able to access our odoo instance from localhost:8069 or the port you specified. Once in it, it will be necessary to create our database, for which we must choose the email, access password, language and language, in addition to selecting if we want to import test data to evaluate Odoo. 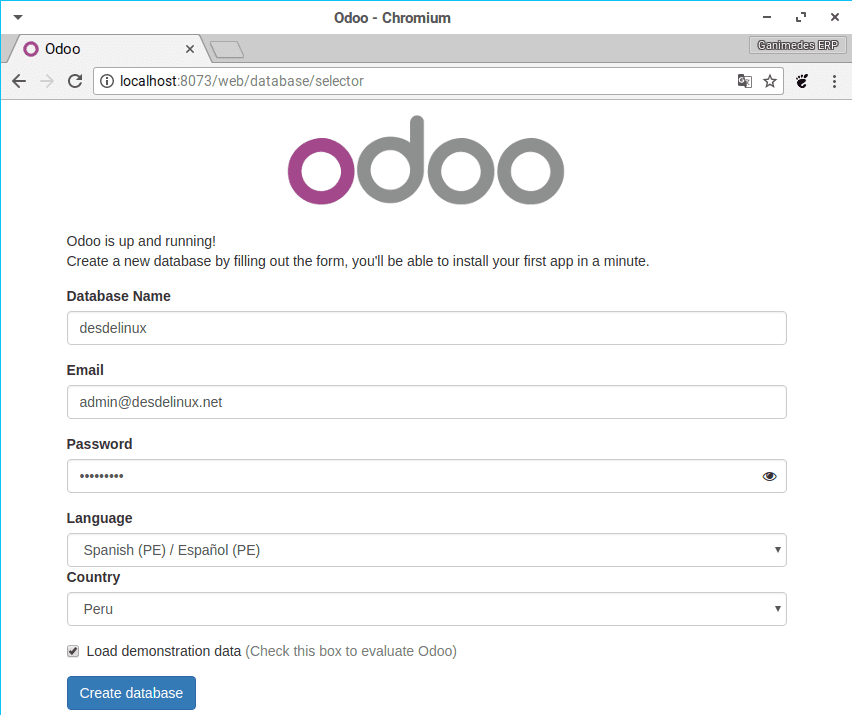 Once the database is created we can access odoo and begin to enjoy its benefits.

El docker-compose.yml that we created in previous steps, in addition to raising the necessary odoo and postgres images, it also creates a volume in our directory to be able to add external modules to our instance. For this, it is enough that we copy a module compatible with the version of odoo that we have executed in said directory, you can add your own modules or download it from odoo apps.

Once we have our module in the extra-addons directory (unzipped) which is in the directory where we have our docker-compose.yml, we proceed to give it the corresponding permissions so that it can be read by our docker. The simple way is that located in the parent directory of extra-addons we execute the following commands from the terminal:

Now from our odoo instance we must activate the developer mode which, depending on the version of odoo that you have, can be done as follows:

The development mode in Odoo 8 is activated from the User profiles, to do this from the menu go to the User category, locate your administrator user and in the lower right part activate the characteristics

In Odoo 9 go to the upper right and click on the date that is next to the user's profile photo, then go to the About option and in the window that opens select Activate developer mode.

Finally in any of the versions we must go to the menu of local modules or apps and click on the link to update the list of modules, and then you can install the modules as explained in the article on How to install modules in Odoo.

Installing packages in our docker

It may be the case that any of the modules or utilities that you want to incorporate into odoo (or a feature of odoo itself) needs the installation of external packages, this can be done quite easy in docker thanks to docker exec which is a utility that allows us to execute commands in a docker container.

The first thing we need to know is the name of our docker instance, which is done with the following command:

To install an application as root in a docker we must execute the following command adapting it to your needs:

Where docker exec -u root odoo9_odoo_1  indicates that a command will be executed as root in the odoo9_odoo_1 instance and pip install xlsxwriter would be the command you want to run.

I hope the tutorial is to your liking, in future articles we will begin to learn how to use Odoo and configure it in our SMEs.

Full path to article: From Linux » GNU / Linux » How to install Odoo with docker and add external modules