I wanted to leave you with an article on how we can use KDE at work, but some unexpected bugs in version 4.10.2 have stopped me for the moment. There are already patches for these errors available in Kubuntu anyway, and they should arrive in a matter of days in the Chakra repositories. Instead, I'll leave you with a somewhat entertaining, if not so productive, installment on how to handle songs, images, and videos on the semantic desktop.

In part 2 of this guide we examined some KIOslaves of the semantic desktop. Apart from those 4 KIOslaves, KDE 4.10 has included others, which are more limited, but which work as well. One of them is the KIOslave search: //, which allows us to generate special folders. Let's look at this in detail.

Do you remember that in Windows there were "special folders"? Under the hierarchy "Users / Username" there are, in Windows, "Libraries" that contain music, videos, images and documents. These libraries correspond to static folders, which Windows treats in a special way, but they are basically nothing more than sets of folders, which have as a great special thing being the place where the Windows 8 Metro applications look for their information.

The irony of the case is that the first operating system that tried to make a semantic desktop was precisely Windows, with the Longhorn project. In that operating system, the Documents, Videos, Pictures and Music folders were supposed to be dynamic, and would contain all the files on the computer. The concepts behind Longhorn, such as a semantic file system called WinFS, were way ahead of their time and the performance of the early alphas was pathetic, so much so that it motivated Microsoft to kick out the managers and strip Longhorn. The few pieces that served after the decommissioning, added to new code, were the foundation of Windows Vista.

In KDE, we finally have this feature. Done well, and with a more than acceptable performance.

This is how we have 4 dynamic folders, which are in the Dolphin Places bar, and which are also KIOslaves and can be used as such.

That a folder is dynamic is not minor. It means that, even if the documents, videos, images or songs are in the recesses of a folder indexed by NEPOMUK, they will be available in these folders. As they are special folders, one can search them by author, image size. A demonstration. 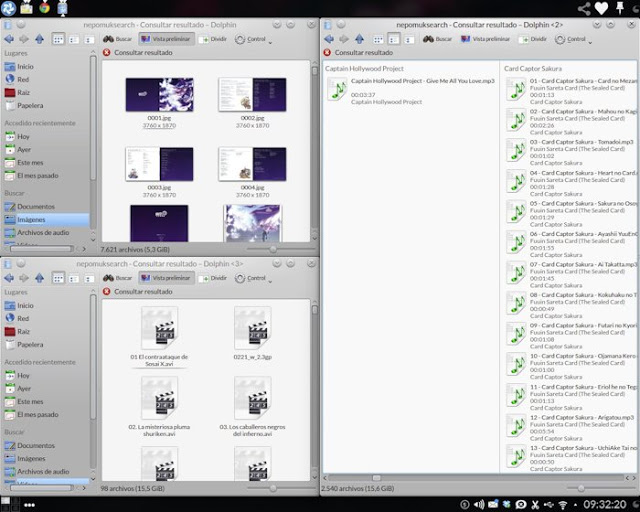 Watch. The Images folder contains, under each image, the size of each file, in pixels. Meanwhile, the audio folder is ordered not by name, not by date, but by artist, and each song shows its real name and duration. These three are special folders, and every time you download a new audio, a new photo, or a new video, they will update themselves. As long as NEPOMUK can see them.

Now what do we do with this? Several KDE programs are already using NEPOMUK for their database.

Amarok 2.7 has included, on an experimental basis, a new Semantic Collection feature. Thus, instead of maintaining its own database, Amarok will use NEPOMUK, saving huge amounts of memory in the process. It is something similar to what Bangarang did, a program that has unfortunately slowed down its development and has severe problems with KDE 4.10. To activate this feature we must:

After that, Amarok will display a separate collection, called "Nepomuk Collection", with all the songs that the Semantic Desktop has indexed. This option has some problems currently, but hopefully everything is in order for Amarok 2.8.

This program, which has released its first version, is remarkable and I think every Semantic Desktop fan should have it. It looks like this. 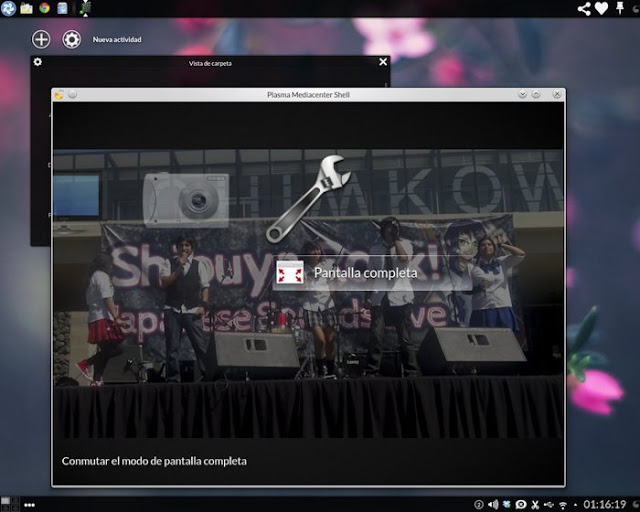 What is behind is a video, which is played with OpenGL acceleration. As you can see, the interface is direct, and you have two options. You can explore in the traditional way, browsing through folders, or you can ask Plasma Media Center to use semantic collections to display all the videos, audios or images that one has. Use it. If it hasn't reached your distribution, ask for it. In Chakra Linux it is installed like this.

Let's hope that the KDE 4.10.2 bug fixes hit everyone's repositories so we can continue with this series. Enjoy the Semantic Desktop until then.