shares
Tweet
Send
Pineapple
Email
Print
This is a contribution from Daniel Durante, thus becoming one of the winners of our weekly competition: «Share what you know about Linux«. Congratulations Daniel!

Poedit is a translation tool, but be careful, let's not confuse it with a translator.
There are other programs that have the same functionality but I think that PoEdit is the most widely used. PoEdit does not translate like a program whose purpose is that, but rather helps us in the task of translating a text from one language to another. That is, it will present us with strings of characters in a language and we are the ones who must translate them into the desired language.

In principle, one may ask, and for that I need a program? Why not directly use text editors such as gedit or the windows notepad? The answer is very simple: PoEdit produces an output of the translated strings in a format prepared to be included directly in the directories of a server that store the pages in html, php code, etc. so it will be recognized as an immediately functional translation file when placed in the translation files directory. Obviously there can (and usually) be more than one file in these directories destined to store the translations into different languages, where each file contains information about what and how to represent the characters of the translation for a given language.

Do you remember how a word processor handles a template? Well, something similar happens with PoEdit. The template file contains the strings to be translated and some spaces reserved for some data that will later be filled in when we start the translation process. These data, in addition to the original and translated literal strings, are, for example, the name of the last translator (since the task could have been started by a translator but not finished by the translator), the name of the translation team, the character set , etc. They are like a kind of metadata that give information about the translation file.

But to translate from a template…?

Let's suppose a website in English language. Its main page is called index.html, to translate it we will have to have a template file called index.pot (the passage from index.html to index.pot is another process that we do not enter). When we have that index.pot file, we simply rename it to index.es.po, if Spanish is the language to which we are going to translate it.

Once the file is named like that, we can start to process it with PoEdit. 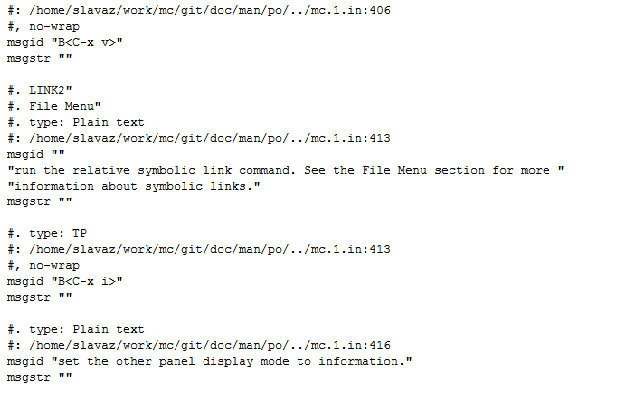 If the question arises and I cannot edit the .po file and put the translation directly between the quotation marks that follow msgstr ?, the answer is Yes, although it is more comfortable and more orderly to do it with PoEdit (not to mention that it would be necessary to enter manually in the correct place the metadata that we talked about before, and it is better to leave that task to PoEdit; also we would not have the option to open the compiled .mo file).

In the following image you have the header of a .po file where the metadata regarding the file appears:

In the .pot file this metadata would not contain information, while in the .po file the information referring to each item would appear.

PoEdit comes in the GNU / Linux application repositories for Debian 6.0 stable / main. I suppose that also for other distros based on .deb packages, its installation is therefore direct, either using applications such as Synaptic or the apt command line manager, in the form:

After its installation, we access the program and proceed to specify the preferences in Edition → Preferences, where we will put our name, and email address. The rest we can, in principle, leave it as Poedit presents it. 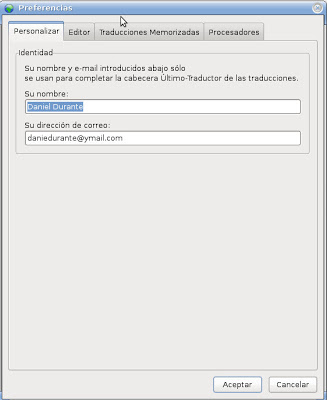 Working with the .po file

First we configure our file in Catalog-> Options as indicated in the following image: 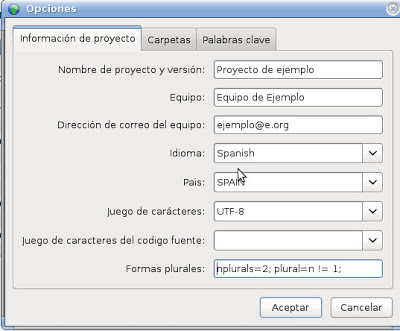 It is important to fill the Plural Forms section with the string nplurals = 2; plural = n! = 1; You will put the rest in a personalized way.

In the Folders tab we will freely select a directory on our computer where we want to have the translations, 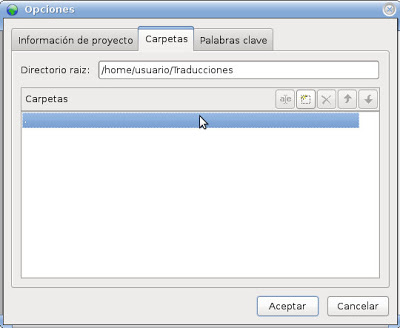 After doing this, you will see if you want to open the .po file with a plain text editor that the meta-data we were referring to has changed.

All ready to start translating the strings that will appear on the main PoEdit screen with a format similar to the following: 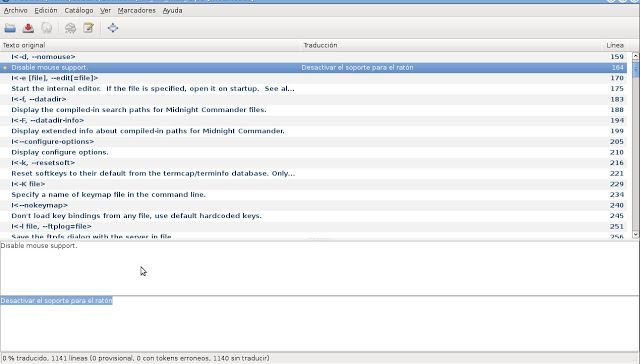 Where we have already translated and included in the lower window the translation of the string that appears above. It only remains to save the changes.

What is that fuzzy?

When we are not clear about the translation of a string but we know how to approximate its translation, we must mark it as fuzzy. In this case, the translation is incomplete and the .po file can be sent to another translator who will review these strings (actually, in the process of several translators and reviewers, everything is reviewed)

Well, as the end of this little tutorial I will tell you that a vision of the complete text is useful, not structured in lines as presented by PoEdit.

To extract the text only in Spanish we use the po2txt command:

(you must have the gettext and translate-toolkit packages installed)