Basically we say that it is a file that contains code written in a certain programming language that the system uses for a certain task. It does not need to have an external input or graphical interface, but it does need to cause an output of processed data (even if the user does not see it).

The language used by Bash is defined by its own interpreter and combines the syntax of other Shells, such as the Korn Shell (ksh) or the C Shell (csh). Many of the commands that are usually used in the console can also be used in scripts, except those that strictly pertain to a particular distribution.

Structure of a Script

To begin we must have a text editor and desire to program. The files that we save with a .sh extension can be executed (or interpreted) by the console, as long as the first line is the following:

This tells the system to use the console to run the file. Also, the # character allows you to write comments. To create the simplest example we add one more line, seen in the following image: 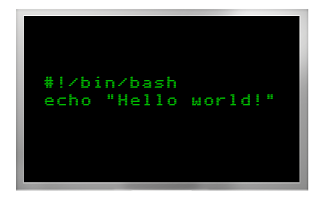 The echo command displays a message on the screen, in this case the typical "Hello world!" If we save it and execute it with the console we will see the result.

The following commands are common and very useful for any type of program. We clarify that there are many more, but for now we will cover the following.

Aliases: allows a string of words to be replaced by a shorter one, allowing code reduction.

break: allows to immediately exit a for, while, until or select loop (we will study loops in detail later)

continue - Similar to break, except that it ignores the current loop and goes to the next one.

declare: declares variables and assigns them values, just like typeset (they work the same way). We can combine it with some options: -i declares integers; -r for read-only variables, whose value cannot be changed; –A for arrays or “arrays”; -f for functions; -x for variables that can be "exported" outside the environment of the script itself.

local: create local variables, which should be used preferably in functions of the script itself to avoid errors. You can use the same functions as the declare command.

logout: allows logging out of a Shell completely; useful for cases where we work with more than one shell window, in which the exit command will only allow one window to be terminated at a time.

printf: allows you to print data and format it. It has many options, so we will mention a few.

read: read a line from standard input (module used in loading data through the keyboard for example). We can pass options like: -t to give a reading limit time; -a so that each word is assigned to a position in the aname array; -d to use a delimiter that will be written at the end of the line; among others.

type: describes a command and its behavior. It can be useful to find out the data definitions for each command.

ulimit: limits the access and use of certain system resources to processes, ideal for programs that allow administrative changes or that are aimed at different types of users. When setting a limit we write a number that represents the kilobytes of the limit.

wait: wait for a certain process or job to be carried out to continue.

Other useful commands that we can add to scripts are represented by symbols.

! wer: executes the last command that started with the expression “wer”.

|: The OR operator generally used to join two regular expressions.

: escape command that allows you to format expressions. For example: a for a sound alert, n for newline, b for backspace, etc.

Go to the next part >>
Thank you Juan Carlos Ortiz!