Manage and convert files from office and multimedia formats efficiently and effectively on an Operating System or Computer it has always been a goal on the part of the average user. For office automation users on GNU / Linux, both the LibreOffice Suite and WPS, among others, have always successfully fulfilled this objective. For users, the multimedia tools are usually many but they tend to be a bit complex for basic users or novices in computing.

On other occasions, we have talked about how to convert multimedia formats using various tools such as: VLC, Handbrake, ddMediaConverter, Mobile Media Converter, Selene Media Encoderand Curlew Multimedia Converter. All the above mentioned applications are usually quite efficient with dozens of options, parameters and settings for audio and video files. But when it comes to just converting audio formats, SoundConverter's turn has come. 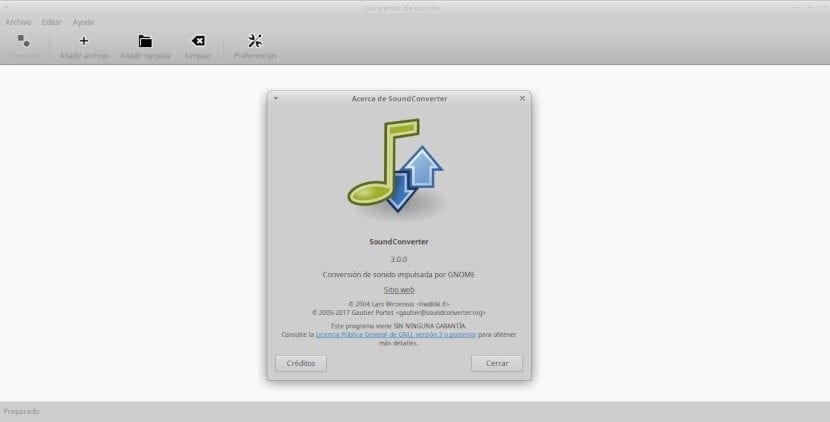 Since the creators of SoundConverter assure that it is a light application, only 204kb in .tar.xz format for its last released version, 3.0.2, on date 01-04-2019. They also promise that it has a clean, easy-to-use interface, highly compatible with "GNOME HIG" Technology, so that the user just does the work and forget about the task in progress.

SoundConverter is a very fast application, since it manages to process a large number of files in record time, and it is multithreaded, since it uses all available CPU cores. It has useful functions in the conversion part, such as a powerful utility for changing the names in an automated way, which can even allow changing the names of the files and creating folders according to the labels used. All this configurable and executable with a simple click of a button.

SoundConverter is a simple, fast and useful audio file converter, specifically developed for the "GNOME Desktop". It is capable of processing (reading and converting) all the audio file formats that "GStreamer" can support, such as: Ogg Vorbis, AAC, MP3, FLAC, WAV, AVI, MPEG, MOV, M4A, AC3, DTS, ALAC, MPC, Clip, APE, SID, MOD, XM, S3M, among others. Also, you can write over files Opus, Ogg Vorbis, FLAC, WAV, AAC and MP3, use any GNOME audio profile and extract audio from some video file formats.

SoundConverter is a program completely created as Free Software. Thus, may be redistributed, and / or modified under the terms of the GNU GPLv3. Its creators are: Gautier portet y Lars Wirzenius. In addition to her Official website, you can find valid information for it in GitHub y LaunchPad.

How do you install?

Remember that SoundConverter requires a Linux Operating System with GNOME Desktop. And that it also uses to run applications and libraries such as: Python, PyGTK, GStreamer, GStreamer-python, Gnome-python. And specific libraries such as "GStreamer-lick" to deal with audio outputs from files ".Mp3".

Despite having a compressed package ".Tar.xz" For its download, decompression and compilation, it can be downloaded, compiled and installed through its repository in GitHub.

In case the package is compiled from GitHub, the official installation procedure is:

If the repositories will be used from a Distro Arch, the procedure is as follows:

In the case of using a DEBIAN or Ubuntu Distro or a derivative of these, the procedure is as follows:

Please note: In some Distros like DEBIAN it is recommended to install the library «gstreamer0.10-plugins-ugly », adding the multimedia repositories of said distro, that is: deb-multimedia repository. And remember that there is also a similar program but for the KDE Desktop called SoundKonverter (GitHub y LaunchPad).

As we already said, it is very simple and fast to use. It only requires adding an audio file (s) using the button "Add file" and then press the button "Turn into". By default, the application converts audio files to the format ".Ogg". But just by going to the window "Preferences" you can change the output format in section "Type of result?" and in the option "Format" change ".Ogg" by ".Mp3", ".flac", ".wav" and ".opus".

As we can see, SoundConverter is everything promised. It's small, fast, and easy to install, use, and convert. It is a useful and great Free Software application, which avoids us using larger and more complex applications like VLC, although it is just as efficient but with many more options for audio and video files. I hope you enjoy it.