shares
Tweet
Send
Pineapple
Email
Print
This article is an update of our Ubuntu 14.04 post-install guide.

Ubuntu 14.10 Utopic Unicorn saw the light a couple of days ago. As we do with each release of this popular distro, here are some things you should do after making a installation from scratch.

It is likely that after the launch of Utopic Unicorn, new updates have appeared for the different packages that the ISO image distributed by Canonical comes with.

For this reason, after finishing the installation it is always recommended to run the Update Manager. You can do it by searching for it in Dash or by executing the following from a terminal:

In the Dash I wrote language support and from there you will be able to add the language you prefer.

Dictionary in Spanish for LibreOffice / OpenOffice

In case you do not have the spell checker in Spanish, it is possible to add it by hand as follows:

1. Go to the LibreOffice extension center

3. Download the dictionary of your preference (general or specific to your country)

With this we will have an OXT file. If not, you have to change the extension of the downloaded file.

4. Open LibreOffice / OpenOffice, select Tools> Extensions and click Add, we go to the directory where the downloaded file is located and we install it.

Due to legal issues, Ubuntu cannot include by default a series of packages that, on the other hand, are very necessary for any user: codecs to play MP3, WMV or encrypted DVDs, additional sources (widely used in Windows), Flash, drivers owners (to make better use of 3D functions or Wi-Fi), etc.

Fortunately, the Ubuntu installer allows you to install all of this from scratch. You just have to enable that option in one of the installer screens.

In case you haven't already done so, you can install them as follows:

Ubuntu should automatically detect and alert you to the availability of 3D drivers. In that case, you will see an icon for a video card on the top panel. Click on that icon and follow the instructions. It is also possible to install the proprietary drivers from the Dash> Additional Drivers.

or write in a terminal:

In order to view some videos and view flash web content in your web browser, you need to install the flash plugin. It is possible to install it directly from the Software Center and entering the word "flash" or from a terminal with the following command:

To add support for Encrypted DVDs (all "originals"), I opened a terminal and typed the following:


At the time of writing this article, the Getdeb and Playdeb packages for Ubuntu 14.10 were not yet available.
GetDeb is a website where Deb packages that do not come in the usual Ubuntu repositories or more current versions of those found there are manufactured and made available to the end user.
Install GetDeb

Playdeb, the game repository for Ubuntu, was created by the same people who gave us getdeb.net, the purpose of the project is to provide Ubuntu users with an unofficial repository with the latest versions of the games.

The most popular tool to configure Ubuntu is Ubuntu Tweak (although it is worth clarifying that in recent days it seems that its development will end, at least on the part of its creator). This wonder allows you to "tune" your Ubuntu and leave it as you like.

To install Ubuntu Tweak, I opened a terminal and typed:

UnSettings is a new tool for customizing Ubuntu. There are other programs like MyUnity, Gnome Tweak Tool, and Ubuntu-Tweak that do the same job, but this one includes some unique features.

In order to compress and decompress some popular free and proprietary formats, you need to install the following packages:

7. Install other package and configuration managers

Synaptic - is a graphical tool for package management based on GTK + and APT. Synaptic allows you to install, update or uninstall program packages in a versatile way.

Installation: Search Software Center: synaptic. Otherwise, you can enter the following command in a terminal ...

aptitude - Command to install applications from the terminal

It is not necessary since we can always use the "apt" command, but here I leave it for those who want it:

Installation: Search Software Center: aptitude. Otherwise, you can enter the following command in a terminal ...

It is not necessary, since when installing the .deb with a double click, the Software Center opens but it may be of interest to some nostalgic people.

Installation: search Software Center: gdebi. Otherwise, you can enter the following command in a terminal ...

Dconf editor - It can be useful when configuring Gnome.

Installation: Search Software Center: dconf editor. Otherwise, you can enter the following command in a terminal ...

To run it, I opened Dash and typed "dconf editor."

In case you can't find an application to do what you want or you don't like the applications that come by default in Ubuntu, you can go to the Ubuntu Software Center.

From there you will be able to install excellent applications with just a few clicks. Some popular picks are:

In case this option is not available, try running the following command first:

If you want to try GNOME Shell instead of Unity.

Installation: enter the following command in a terminal:

Caution: installing GNOME Shell in this way will possibly install other GNOME packages that the Ubuntu guys left out. For example, Nautilus. Sure, maybe it is what you want, so in that case there would be no problem but you have to be aware that it can bring you more than one headache. If you want to use GNOME Shell, without leaving Ubuntu, my recommendation is to try the derived distribution Ubuntu GNOME.
cinnamon

Cinammon is a fork of Gnome 3 used and developed by the creators of Linux Mint that allows you to have a lower task bar with the classic Start Menu.

If you like Cinnamon and Ubuntu it might be a good idea to try the derived distribution Linux Mint.
MATE

MATE is a fork of Gnome 2 that emerged as an alternative for GNOME users after the drastic change that this desktop environment underwent when using its controversial Shell. Basically, MATE is GNOME 2, but they changed the names of some of their packages.

A better way to test MATE is by downloading the derived distribution Ubuntu MATE. In this way, you avoid any kind of problems when installing your favorite desktop environment. 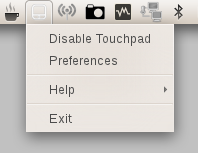 Indicators - You can install many indicators, which will appear on the top panel of your desktop. These indicators can display information about many things (weather, hardware sensors, ssh, system monitors, dropbox, virtualbox, etc.).

A complete list of indicators, along with a brief description of their installation, is available at Ask Ubuntu. 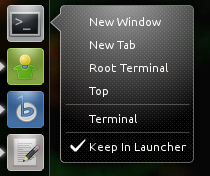 quicklist - Quicklists allow you to access common functionalities of the applications. They run through the bar that appears on the left on your desktop.

Ubuntu already comes with several installed by default. However, it is possible to use some custom quicklists. A complete list, along with a brief description of its installation, is available at Ask Ubuntu.

Compiz is the one who makes those amazing stationery that leaves us all speechless. Unfortunately Ubuntu does not come with any graphical interface to configure Compiz. Also, it doesn't come with all the plugins installed.

To install them, I opened a terminal and typed:

To remove the so-called "global menu", which makes the applications menu appear on the top panel of your desktop, I simply opened a terminal and typed the following:

To revert the changes, open a terminal and enter:

Window menus in the title bar

Before, the menus of applications that were not maximized also appeared in the global menu. However, it is now possible for the menus in these windows to appear in their own title bar. To do this, you just have to open the Dash, write "Appearance", go to the "Behavior" tab and select the option "Show window menus in the title bar."

To disable online searches, I opened the dashboard System Settings> Privacy and Security> Search. Once there, deselect the option "Include online results."

To deactivate only the "commercial" searches that appear in the Dash, you can go to Applications> Filter Results> Type> Extensions. Click on the plugin and select Deactivate.

To disable all "commercial" searches (Amazon, Ebay, Music Store, Popular Tracks Online, Skimlinks, Ubuntu One Music Search & Ubuntu Shop) in one fell swoop you can open a terminal and execute the following command:

14. Integrate the web to your desktop

To get started, I accessed the dashboard System Settings> Online Accounts. Once there, click on the "Add Account" button.

The applications that use this data are Empathy, Gwibber and Shotwell.

Ubuntu WebApps allows websites such as Gmail, Grooveshark, Last.fm, Facebook, Google Docs and many others, to integrate seamlessly with the Unity desktop: you will be able to search the site through HUD, you will receive desktop notifications, quicklists will be added and it will even be integrated with the messages and notifications menu.

To get started, just visit one of the supported sites (there is a complete list here.) and click on the "install" pop-up, which will appear as shown in the image above.

Nothing better than taking a look at the official documentation (in Spanish) for Ubuntu. It is an excellent help for newcomers and, in addition to being very comprehensive, it was written with new users in mind, so it is very useful and easy to read.

You will be able to find information about what's new in Ubuntu and information on how to use the launcher to start applications (which can be confusing for those who have never used Unity), how to search for applications, files, music and much more with Dash, how to manage applications and settings with the menu bar, how to close the session, turn off or change user and a very long etcetera.

Full path to article: From Linux » Distributions » What to do after installing Ubuntu 14.10 Utopic Unicorn