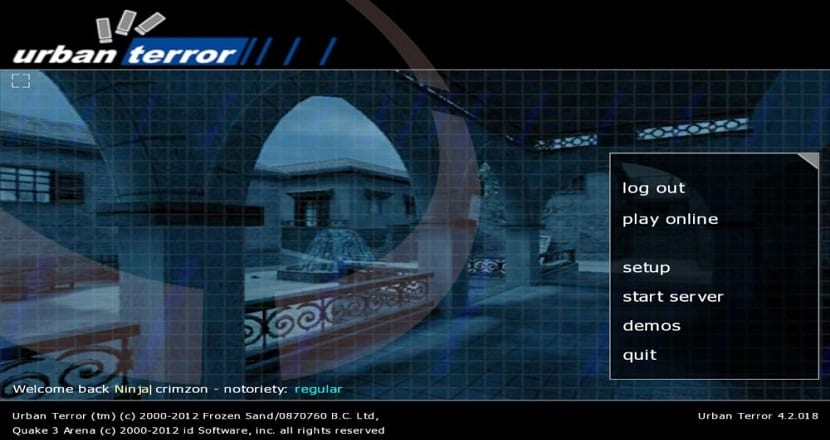 Urban Terror is a free multiplayer first person shooter game. Urban Terror uuse the ioquake3 engine, as well as being a complement to the Quake III Arena.

This game focuses on combining realism with fast-paced action from shooters such as Quake III Arena and Unreal Tournament. The realism in the mod is introduced through a number of changes.

Available weapons are less accurate when fired while moving and require a reload after it has been spent. The number of weapons and other equipment that can be transported is limited.

The damage is also realistic, based on dividing the player's objective into discrete areas. In addition to the damage system, wounds require bandages and injuries sustained to the legs or feet significantly slow down the player until they are bandaged.

As well a resistance system is present and is exhausted by activities like running or jumping; Squatting allows the resistance bar to recover faster.

Depending on the map being played, external environments are also more realistic and may include weather effects such as rain or snow.

The game maintains very high frame rates while offering excellent graphics, although some maps are better than others.

It also offers other features that you have come to expect, such as multiplayer (which is the specialty of the game as there is no single player mode), and a wide variety of weapons to choose from.

In order to run this game on your computer, It is necessary that you have at least the following minimum requirements for its execution:

How to install Urban Terror on the different Linux distributions?

Officially to be able to install this game on our Linux distribution We will have to go to the project's website and in its download section we will find the links to download it.

The packed game file is 1.4 GB in size so downloading may take a few minutes.

At the end of the download you will only have to unzip the package and inside it comes the installer launcher.

In a terminal we are going to execute the following command to perform the installation:

Here we will have to wait a few minutes, since the download of the game is more than 1GB.

To check if there is an update and apply it, we can do this by executing the following command in a terminal:

And ready with it we can start playing this game in our system.

When you first start the game, You will be asked to enter a username that will identify you in all the games you participate in.

Both can be used to change controls, system settings, player settings, and other applicable settings.

Now to start playing online we simply have to click on the "Play Online" button.