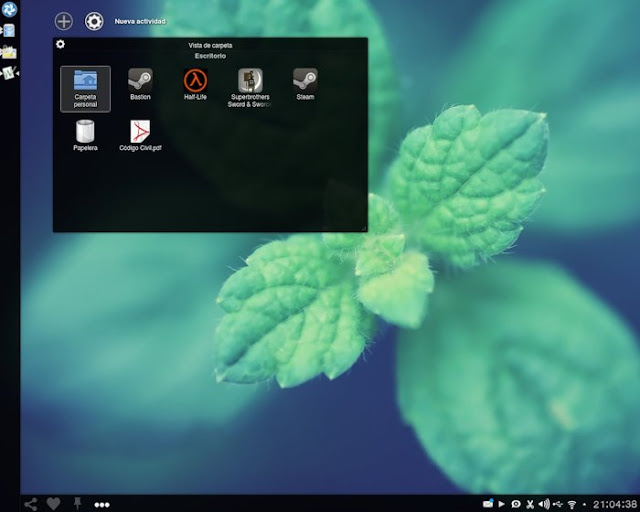 This is my current desktop.

While this desktop is not going to win any beauty contests, not least because its background is Minta, the default background with Chakra Linux Benz, take a good look at it and you will notice a few things that are very different from an ordinary KDE desktop. I'll show you how to get there, and what this has to do with the semantic desktop.

Chakra Linux is a distribution, although somewhat heavy, faithful to KDE. Rather than argue about it, I'll use its main advantage for this article: the fact that all the experimental features of KDE are close at hand. If you don't have it, install it, because I'll rely on it for explanations.

It's in http://chakraos.org/home/?get/, to download and enjoy. The installer, Tribe, is beautiful, and uses Marble to project a three-dimensional globe when choosing system time zones. However, it is not a distro for people who are uncomfortable with the command line, and it demands a lot of learning. Install it, read the wikis, see how in most cases it runs all the hardware, because you will need it to follow me.

Many of the packages I will be using are available on Kubuntu, both through the Kubuntu Active project and through the Netrunner Dryland extra repository. However, I don't know the status of other distributions.

Let's not think here about an activation in the style of Windows and its anti-piracy policies, but let's think about Plasma Active, the set of libraries that KDE has prepared for tablets, and which, against what you might think, works incredible (in some cases ) when you have a keyboard and mouse. On Chakra Linux, it installs like this.

Let's wait a bit, because Chakra will go down and compile the Plasma Active libraries for us. A series of programs that do not serve us will be installed, such as the Active Web browser (one pass if one has a touch screen, but very unstable), and others that do work, such as the Active RSS reader (precious, even for those who only has a mouse), and the two most important: the Plasma Contour container (which is what you see in the screenshot) and the Share-Prefer-Connect buttons.

The Plasma Contour container has several advantages over the traditional desktop. As you can see, it has two buttons: the + sign is for adding plasmoids and the sign with the gear is for preferences. Next to both buttons, the name of the activity you are in appears.

Below is the area for applications. Each application is delimited in its own window, with a button in the upper left corner that is used to configure it, a dotted corner that marks from where the size of the app can be changed, and a title bar that indicates what the plasmoid is . When moved on the desktop, the Plasma component leaves a trail, and always snaps to an invisible grid, something that is one of the most important shortcomings of the default KDE desktop.

And no, there is no cashew. It's much neater, it's perfect.

This feature is like the Windows 8 Charms bar, only done right. Unfortunately, the support for this feature is still limited, but let's hope that for KDE 4.11 or KDE 4.12 the user account support will be 100% operational, with which we can use these buttons to share, prefer and connect all our content throughout and width of our social networks. In the meantime, we can do a few things.

Suppose we have lyrics to a song that we liked, and we want to send it by email, fast. The traditional way of doing it would be a) to put the letter on the screen on a post it or something like that, and b) to open an email program and send it as an attachment. The way to do it according to the KDE semantic desktop is very different. 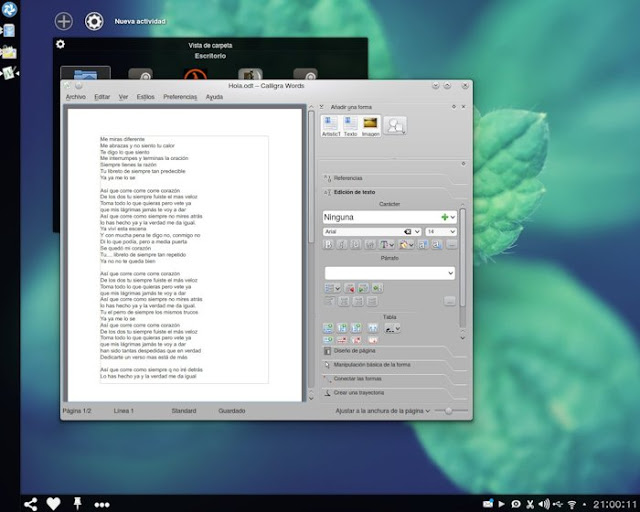 Once we opened this letter, which I had copied and pasted into Calligra for the example, we observed that the Share-Prefer-Connect buttons, which were gray, have turned white. That's because the extra features of Plasma Active are supported, and we'll see what this means.

In reverse order, the third button, Connect, connects our document to the activity we are in. If we press it, this menu will appear. 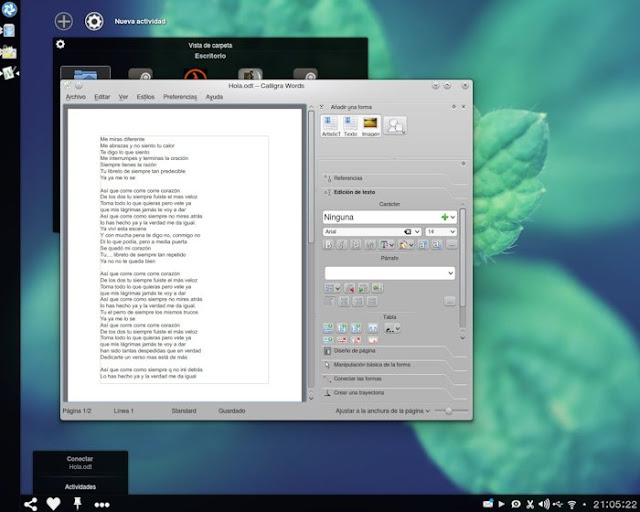 With this we can connect our letter, or a more serious document that we are working on, to the activities of KDE. By pressing where it says "Activities" we will see a list of all available activities.

The Prefer button gives us this. 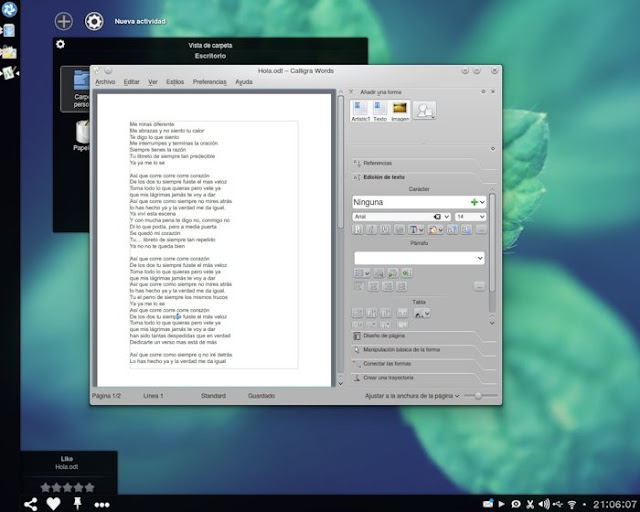 From here we can order the semantic desk to register a 5-star rating for this document, to put one on it, or to remove its preference, if we want to. Assuming that we like this letter, we may want to give it five stars, and then find it quickly using NEPOMUK. Everything, while still working on the document itself.

But didn't we want to mail the letter? Look what happens when the first button is pressed: Share. 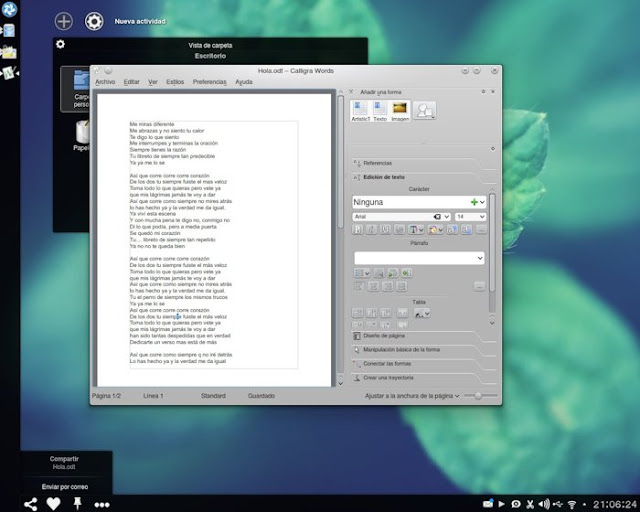 So is. You don't even need to think about what to do; "Connect" is pressed and the letter is mailed. 1-2. Open KMail, put an allusive text on it, and attach the file, the Semantic Desktop takes care of it.

In an upcoming installment, we'll sort files with the NEPOMUK tags, put hot folders on the desktop, and see how far we can go to the semantic desktop.