CES is the global gathering place for all who thrive in the consumer technology business. It has served as a proving ground for innovators and cutting-edge technologies for 50 years, it is the global stage where next generation innovations are brought to market.

In this new CES 2019, NVIDIA took the opportunity to make the announcement at this event where they have chosen to present their new mid-range graphics card, the NVIDIA GeForce RTX 2060.

About the NVIDIA GeForce RTX 2060

Designed to deliver performance around the GeForce GTX 1070 Ti, the new card will go on sale to the public next week from January 15, with prices starting at $ 369 euros.

It is also a change of status for the parties GeForce xx60 in general, which have traditionally always featured their own GPU, with NVIDIA which is lowered to reduce costs.

In addition, at this conference the guys from Nvidia also took the opportunity to make the announcement compatibility with FreeSync technology (VESA Adaptive-Sync), which allows the video card to change the monitor's refresh rate to ensure a smooth and smooth picture during gaming.

FreeSync is an adaptive sync technology for LCD displays that supports a dynamic refresh rate to reduce tearing and stuttering caused by misalignment with the frame rate of content.

FreeSync was developed by AMD and was first announced in 2014 to compete against Nvidia's proprietary G-Sync.

Officially, support for only a dozen models has been announced, but NVIDIA will allow FreeSync to be activated manually for all monitors without exception. FreeSync on NVIDIA will only work for Pascal or higher video cards (Volta, Turing). 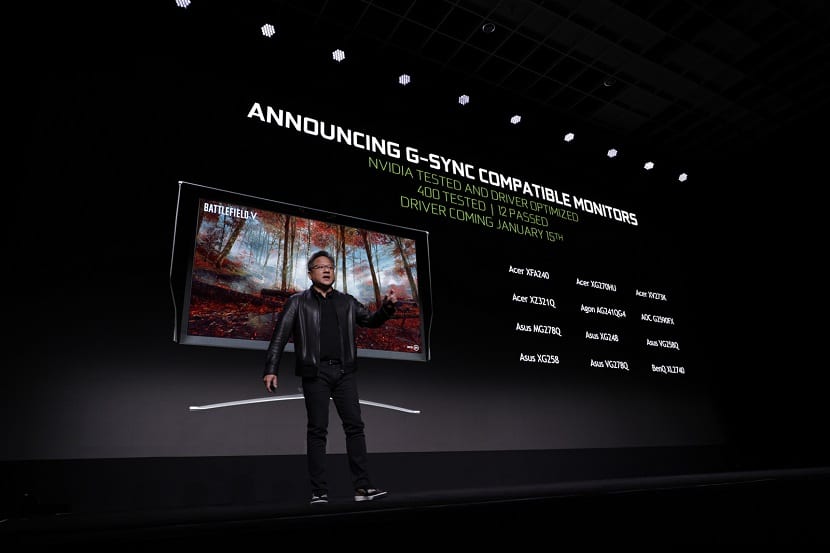 Probably the catalyst for this decision was that the number of FreeSync monitor models on the market outnumber the G-Sync models by almost an order of magnitude.

The driver for Windows with this new support will be released in a week, so nothing has been reported about the driver for Linux yet, Since G-Sync is also compatible with Linux, we can expect support for FreeSync.

It is still unknown if the FreeSync support on the NVIDIA side will be intended for a connection through a DisplayPort or HDMI port in which case it will work on both.

Finally, another redeemable point at CES 2019, is that NVIDIA made in this conference the announcement of a new range of graphics cards for laptops.

Of which the launch of approximately 40 notebook models was announced, of which up to 17 will be Max-Q models.

According to Jen-Hsun, CEO of NVIDIA, an MSI GS65 Stealth equipped with an RTX 2080 Max-Q GPU is faster than a next-generation 1080 desktop GPU.

He also claimed that the system is twice as fast as a PlayStation 4 Pro with the ability to run Battlefield V with Nvidia's Ray Tracing technology enabled at 60 frames per second.

Without further ado, we only have to wait for the announcement of Freesync support for Linux.