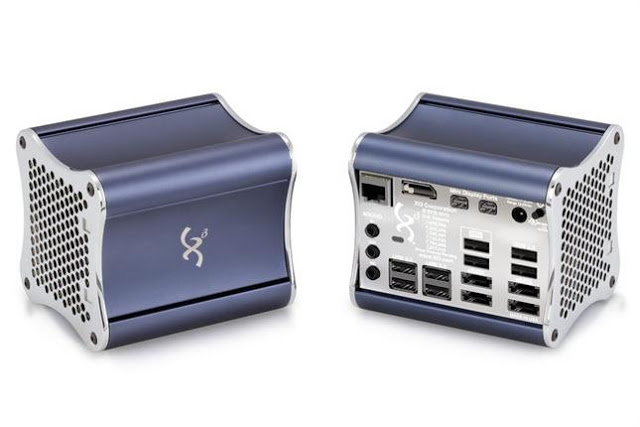 Valve and Steam, a bit of history

Valve, the firm behind classics like Half Life, has long had a digital video game store - in the style of what is available today on smartphones - to download games and, for a few months, also conventional software. In addition, it has 50 million users.

This platform is called Steam and by dispensing with hardware, it reduces the price of video games, and can also accommodate and expose a large number of independent studios, which would otherwise have difficulty bringing their games to the general public.

Fortunately, for a few months Valve has been working hard to make available to Linux users a client that runs under that system and that allows game developers to enter that market.

On the other hand, Valve has long said that they are designing their own video game console, called Steam Box.

At CES, a good part of journalism believed that they saw the future of that console on a tiny PC. It is the Hi3 Piston, a cubic PC with a modular design with a 3,2 GHz quad-core processor, 4 or 8 GB of RAM, 1 TB of storage, an SSD disk and ports of all kinds; the price is $ 999, although there are more modest versions.

So is that the Steam Box? Well, not exactly ...

What is the Steam Box?

Steam Box is basically a concept. That is, a system, a unified standard designed by Valve that many manufacturers will be able to adhere to in order to launch their own Steam Box, so to speak. Indeed, there will be different versions on the market. And each one may have its own peculiarities and differentiating characteristics.

What is that standard?

First of all, all systems must be based on Steam and its Big Picture mode, which allows optimized playback of the Steam platform on televisions. In this way, the user's game catalog will be exclusively nourished by what Valve offers on Steam, including recently, computer applications. However, theoretically the user will have the ability to install any game on their Steam Box, whether or not it is compatible with Steam, as long as it is compatible with the operating system installed on their machine.

Second, all systems must be open and have a modular structure. In this sense, the user will have the ability to expand the capabilities and technical specifications of their Steam Box, including the operating system. For example, the Piston system allows the expansion of RAM and even the CPU. And Bigfoot, despite being Linux based, you can install Windows and expand the RAM.

And thirdly, they must be ready to play without the need for any initial or additional setup. In this sense, all Steam Box systems should work as a console, so that once turned on, we can directly access Steam, our games and finally get to play.

Piston was originally nothing more than a miniPC project that tried to finance itself through the crowdfunding portal KickStarter, but which has ended up being financed by Valve itself. In this way, its manufacturer, Xi3, has become the Steam Box standard. And it is very likely that Piston will become the first Steam Box model to see the light, since its launch is expected in March or April of this year.

Will there be a Valve Steam Box?

At this point, it must be clarified that Piston is not the expected Valve console. Rather, it is a mini-computer made by Xi3 and funded by Valve, which has adhered to the Steam Box standard. And as such, it will be the first Steam Box model to see the light. But for fans of Gabe Newell and co, you'll be happy to know that Valve works on its own Steam Box.

This will be Valve's game console, although very few details are known about it. Among those that are known, the fact that internally, this Steam Box model is called Bigfoot stands out. We also know that it will run under Linux, although the user can install the operating system they prefer. And it will have a completely innovative control system. Forget about motion sensitivity, and say hello to biometric controls.

These controls, which will take the form of a standard controller, will be able to monitor multiple facets of our body. From our pulsations, to our fingerprints, through our own retinas. It is clear that these readings will later have an impact on the playability of the titles that are presented for the platform. But no details have been specified. And of course, these controls will allow curious things like turning on our systems by reading our fingerprint.